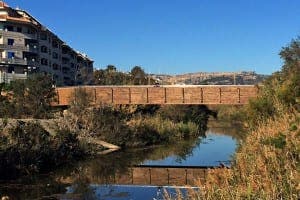 The 33 metre long and two metre wide wooden structure has been hoisted into place over the mouth of the Rio Manilva to connect the two communities.

The bridge has been financed by the Casares and Manilva town halls and the Junta de Andalucia.

Until now, people have had to walk across the beach and get their feet wet during the winter months. Or they have had to cross over the busy motorway bridge.

It is the latest stage in the ambitious La Senda Litoral project, which aims to create a giant walkway stretching 160km from Manilva to Nerja.