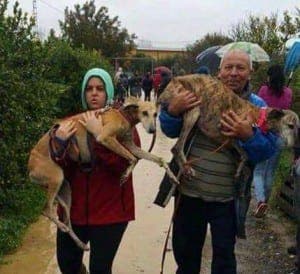 EXPATS have set up a Facebook group to help victims of the weekend’s floods.

Dozens of people have already posted in the Help the Homeless and Flood Victims group, which now has over 1,300 members.

Clothing and food collections and pet rescues have all been co-ordinated through the Costa del Sol channel, while others have pleaded for more people to get involved with local relief efforts.

Some people have even offered up their properties to those made homeless.

Amongst those being helped by group members are dog and cat rescues in Cartama, one of the worst hit areas, Los Barrios and ADANA in Estepona.

Help is also being offered on other Costa del Sol groups, such as Sotogrande Community Group and Manilva Coffee Chat.