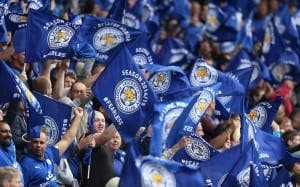 The heavily intoxicated Leicester City fans were arrested the day before a Champions League quarter final tie against Atletico Madrid.

They were all held behind bars for 36 hours and then sentenced by a judge for charges including resisting arrest, causing minor injuries, damage to public property.

The men were just eight of around 70 involved in altercations with the police, with the police being criticised by some witnesses for using ‘excessive force’.