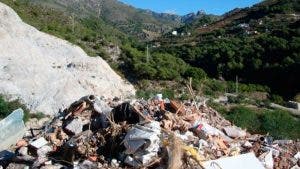 THE mayor of Nerja is being investigated in an illegal toxic dump probe.

Rosa Arrabal is among 40 local public officials and businessmen who are caught up in the investigation, which has seen €5 million worth of assets seized.

It is alleged the group issued false certificates to companies who contracted them for waste management, which said a landfill site was legal.

The 36,000 square-meter dumping ground, next to the La Miel River within the protected Pinar y Dehesa del Rio Chillar and Sierra de Tejera, Almijara y Alhama natural parks,  is thought to be around 15 years old.

Investigators say the dump is a ‘serious danger to the environment and the balance of natural ecosystems, as well as a significant fire risk.’

It has seen uncontrolled fly-tipping for years, featuring many different dangerous construction and demolition waste.

Because the area is home to a rare flora and endangered species, a wildfire could have disastrous effects on the areas biodiversity.
All of the suspects must now appear before a judge.