The PP politicians Carmen de Miguel and Soledad Córdova and ex-union bosses Francisco Carbonero and Manuel Pastrana are set to join a list of 25 leading ex-politicians to be tried in the ERE case set to begin in December.

The pair, who were in the PP government of Jose Maria Aznar, are being probed over their involvement in a series of bogus illegal payments to a group of 51 Huelva miners.

It came when the current Minister of the Interior Juan Ignacio Zoido was the government’s delegate in Andalucia.

The former leaders of the CCOO and the UGT unions meanwhile are also accused of being part of the siphoning of at least €40million via the false payouts to the minors in the Faja Pirítica de Huelva case.

In total, at least €855 million in public funds were fraudulently taken, via the Junta over a decade.

Sevilla judge María Núñez Bolaños hopes that the trial will begin in December and could take more than a year to conclude. 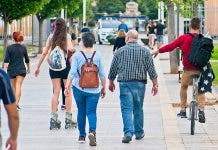