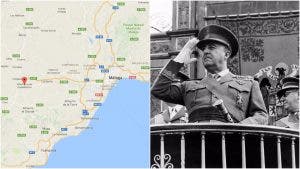 AN Andalucia mayor is being sued for refusing to change his town’s name.

Toñi Ledesma was ordered to change the name of the Malaga town Villafranco del Guadalhorce in 2015.

It came after legislation called for three municipalities with Franco connotations to alter their titles.

The other two, Bembezar del Cuadillo in Cordoba and Queipo de Llano in Sevilla, both obliged.

Lawyer Eduardo Ranz said the small town is ‘the last place in Andalucia that refers to Francisco Franco and his dictatorship.’

Mayor Ledesma argued the town hall has received no complaints, before adding that she would never alter its name without consulting residents.

President of the Malaga Association of Historic Memory Jose Sanchez denounced the council for their lack of action.

“Imagine if we had a village called ‘Villa de Hitler’ or ‘Villa de Mussolini’, we would all like to change that,” he complained.