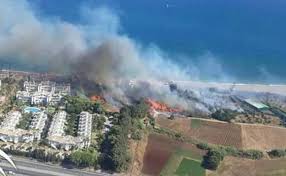 FIREFIGHTERS are tackling a blaze in Estepona.

So far, 16 bomberos and two helicopters carrying water have been called to the fire in the El Velerin area.

The fire erupted in the Dominio Beach development, which contains many homes and sits near forestal areas.

The fire is believed to have begun at 5pm but the cause is still unknown.

El Velerin and Dominio Beach urbanisations have both been evacuated.

UPDATE: Authorities are confident they can control the fire over the coming hours