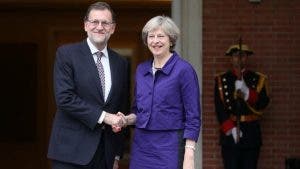 THE UK wants to secure military ties with Spain post-Brexit.

As part of a charm offensive on the continent, British officials in Spain have vowed to cooperate closer with Madrid on military collaboration and intelligence issues.

UK ambassador Simon Manley revealed the UK was looking at ways to work with the country on terror and cybersecurity risks.

He said: “We are studying the various possibilities offered by military cooperation, such as exchanges, manoeuvres or sharing best practices, to identify new opportunities for collaboration.

“I hope that this increased military cooperation reinforces an already broad and deep bilateral relationship.”

His comments came as the HMS Duncan, one of the UK’s most technological advanced destroyers, moored in the UK after stopping at Malaga.

Spain’s chief of defence General Fernando Alejandre said Madrid wants to ‘continue working together on issues that affect us beyond the departure of the United Kingdom from the European Union.’