A BRITISH woman has been found dead in a ditch in southern Spain.

The yet unnamed 39-year-old was located in Los Ramos, near Murcia, on Saturday morning.

The lifeless body, found in an irrigation canal, is believed to have been a victim of a hit-and-run.

Spanish police she was either hit by a car which forced her over the fence and into the canal, or she was thrown into the canal by a hit-and-run driver.

Cops have arrested the owner of a nearby destroyed vehicle which had been burnt out.

The owner has refused to make a statement and has been released pending an ongoing investigation.

A Policia Local spokesman in Murcia said in a tweet: “Yesterday morning the body of a woman has been found by the RM-301 road between Los Ramos and Torreaguera. 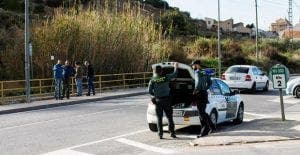 “The dead woman was a British passport holder.

“A burnt-out vehicle was found less than a mile away. A link between the two has not been ruled out.”

A local emergency service spokesman said: “Two ambulances were sent to the scene along with local police and Guardia Civil officers. Firefighters were also informed.

“All they could do was confirm the woman, who was approximately 39 years old, was already dead after they reached the scene.”

The woman is believed to be an expat but this has yet to be confirmed by authorities.