EXPAT children as young as eight have been allegedly kicked out of their football league for being ‘too good’ and ‘too British’.

The organisers of Field of Dreams FC in Calahonda are furious that they have been ejected from their league ‘for no apparent reason and without prior notice’.

The team of keen young footballers had been due to start playing in the Liga Escuelita de Mijas in October, but was told it was no longer allowed to play just one week beforehand.
Head coach Matt Gore, who has a UEFA 3 licence, described the ban as ‘racist’.

“I was told over the phone that all the other coaches got together and decided they didn’t want us in the league’,” Gore, 42, who has been coaching for 20 years, told the Olive Press.

“Racism is a very powerful word and the reality of being an expat in Spain is no different.
“We are basically being discriminated against, while all we want to do is play football.” 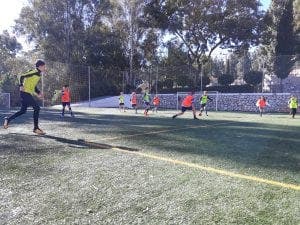 While Mijas Town Hall claimed the reason was because the team was not connected to a specific ‘municipal school’, Gore believes it is for different reasons.

He claims the issue only emerged after Field of Dreams, which was officially incorporated in 2013, dominated the league for the last three years, winning seven trophies.

Expat lawyer Sean Thacker, 48, whose son has been playing for the club, agreed.

He said: “I find it amazing that children are basically being discriminated against for their success.”

A spokesman for the town hall insisted that the decision was not racist, just that the league was now strictly for ‘teams which are part of the Municipal School of Soccer’.

Jesus Moreno added that other teams have also been removed.

He confirmed however, that the team could join the municipal league by registering correctly, ‘so they can play next season’.

“But for now it is impossible for Field of Dreams, or ANY other external team to enter the league of the Escuela Municipal de Fútbol,” he said.

He failed to comment on why a new league was created in the first place.