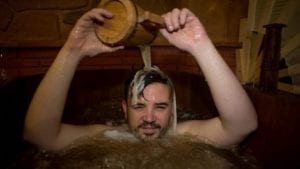 FOR some the combination of beer and spa treatments is a match made in heaven.

But reaching the pearly gates has now got a little easier.

Just drive up to Granada for Spain’s first beer spa where the locally-brewed Alhambra beer is always on tap.

Inside the bath itself is yeast, hops, malt and cinnamon which are absorbed into the skin in 20 minutes.

Each bath also has an arrayof beer taps on the side for constant refills.

There is also a barley bed where you can relax on a bed of fresh barley.