A BLACK actor in Spain has been left injured after a savage racist attack.

Marius Makon, 34, is a theatre and television actor who was born in Cameroon but raised in Spain.

But while enjoying drinks at a bar in Mostoles, near Madrid, Makon says he was set upon by a drunk white woman. 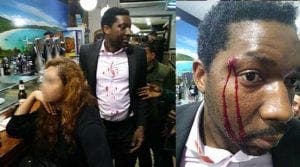 She allegedly shouted: “I don’t want blacks in this place or in front of me,

“I’m white. I can kill you and nothing will happen to me.”

It was then she struck him in his face with a beer bottle.

Makon was treated at a hospital for injuries near to his right eye on the early hours of Sunday morning.

Spain’s Migration Network is pressing charges and asking for prosecutors to investigate the incident as a hate crime.

Police have arrested a 32-year-old woman originally from El Salvador.