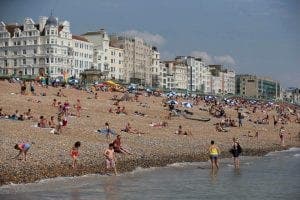 SNAPPING a photo on the beach is just as important as being on the holiday itself these days.

If you can’t show off to your friends at home by posting sizzling pictures on Instagram, is there any point in going at all?

And with its white sandy beaches and millions of tourists each year, you would think that Spain would come out on top for the most instagrammed beaches.

But it is the UK which is home to three of the most photo-friendly beaches in Europe.
Research by Globehunters analysed Instagram hashtags and looked at the top 60 most Instagrammed beaches on the continent.

While the number one spot was handed to Positano, situated on Italy’s Amalfi Coast, beaches in the UK made up half of the top six.

UK beaches also make up 15% of the overall top 60 beaches in Europe in total.