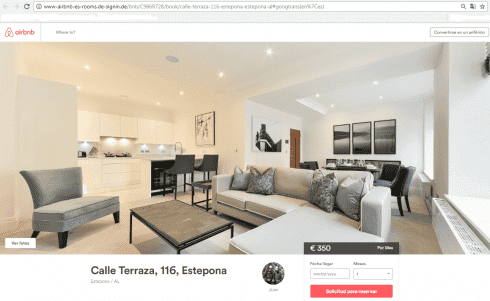 A FRAUDSTER is conning expats using a fake Airbnb website renting out non-existent properties on the Costa del Sol.

An Olive Press probe discovered one property on popular advertisement website, Milanuncios, which was purporting to be a luxury apartment in the centre of Estepona.

But the ultra-modern pad seemed too extravagant and too big for a rental price of just €350 a month.

After making contact, the scammer immediately requested payment of two months of rent and a deposit through Airbnb, along with personal details including a name, telephone number and I.D.

Despite the undercover journalist’s persistent requests to view the property, the landlord claimed he was unable to meet as he had recently moved to Denmark for an engineering job.

He sent a copy of his I.D. card which the Olive Press discovered belonged to a former Spanish political advisor.

Choosing to remain anonymous, the victim told the Olive Press his identity was stolen after sending personal details online when securing a holiday rental.

Although the impressive and genuine-looking Airbnb page boasted a throng of five-star ratings and a verified account, the website address did not match that of the real Airbnb, nor did it have a homepage.

The Olive Press has traced the website IP address and located the fraudster’s computer on a street in Copenhagen.

However, the website domain was bought in Germany and was last modified in December 2016, suggesting the shark has been conning holiday makers for some years.

Sue Callow, based in Benalmadena, told the Olive Press she almost fell prey to the scammer using the same images five years ago.

“It looked gorgeous and it was so cheap, so I emailed.

“He said he was in London and asked if I could do a money transfer and once received, I could go to an office – he didn’t say where it was – to pick up the keys,” said the 55-year-old who has lived in Spain for 32 years.

Since we discovered the first property, the ‘landlord’ has advertised a number of similar luxury properties on Milanuncios for just €300 per month using different hotmail accounts. 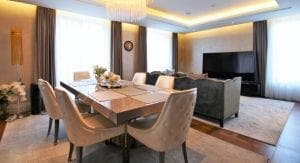 The scammer uploads the advertisements late at night and deletes them the following morning.

Analysing the conman’s messages, Marbella-based lawyer Antonio Flores, at Lawbird, told the Olive Press: “It is a scam. The way he writes, alternating formal and informal modes of addressing people and his choice of words tell me he is not a native Spanish speaker (like soltar dinero).

“These scammers like to pass for engineers in other countries, I can’t recall how many times I’ve dealt with ‘engineers’ working in Germany, Holland and now, Denmark.”

Director of The Finance Bureau, Tancrede de Pola, said a tell-tale sign is when the price seems too good to be true.

“Scammers will present themselves as bona fide with a back-story about themselves and  will make references to well-known organisations such as Airbnb in order to confer respectability,” he said.

The web hosting company failed to comment in time for press.