Eleven more were caught as they landed close to Cartagena, some 350km further north than the Costa del Sol areas that are the typical destination of refugees.

Respite from the gota fria storms has made crossings easier, and steady weather has resumed the steady flow of African migrants attempting to cross the Alboran Sea onboard small boats, Murcia Today reports.

On this occasion, all were attended by Red Cross volunteers.

Policía Nacional are reportedly making immediate plans for their repatriation 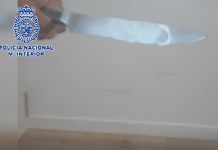