In today’s Europe, Lisa Tilley asks should it be legal to force a wild animal to perform human tricks. A dancing European Brown Bear touring with a medieval market and three Siberian Bears performing at a Granada circus have provoked a fresh debate on the subject.

A PERFORMING bear at a medieval market in Los Morales near Sevilla caused one onlooker in particular to question the morality and legality of such a spectacle. The eyewitness, who only gave his name as David, described how he was enjoying the market when, “suddenly this performing, dancing bear appeared.”

During its ten-minute act, the bear danced, clapped and rolled over – much to the delight of onlookers who applauded, shouted and touched the back of the bear as it was finally led away. David, on the other hand, was shocked and disturbed. “I was really upset about it. How much pain did that animal have to go through to learn such unnatural stunts?” he asked the Olive Press.

Meanwhile hundreds of kilometres away in Granada, exotic posters advertising the Quiros circus featured not only giant bears, but also the government logo of the Ministry of Culture. It transpires the Scenic Arts and Music department has a finance programme for circuses – although a spokesman told the Olive Press the Quiros circus has not applied for future funding.

During the circus act, three bears are wheeled into the ring on an open-top jeep – one dressed in a jester outfit. The bears are made to balance on balls and walk on barrels. One even poses on a podium that is pushed around by performing dogs. 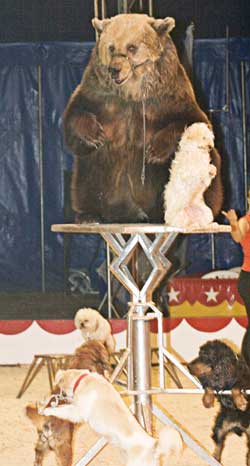 The existence of performing bears has caused incense among animal welfare groups, who are calling for Europe-wide legislation against the use of wild animals in street and circus acts.

Tima, the bear seen performing at the medieval market, is said to be a European Brown Bear (Ursus arctos arctos), a species at risk of extinction in many of its native areas. Complaints against the act at the touring medieval market date back to 2006, but Tima continues to perform around the country.

David first raised the bear’s plight on the Iberianature forum (www.iberianatureforum.com), although he was initially hesitant to report the act. He was worried that a surge of complaints would force the bear underground. “My only concern is the bear” he told the Olive Press. “I worry that by kicking up a fuss, the attention would lead to the bear being killed and dumped in the woods somewhere”.

But the bear’s handlers are no strangers to objections: in April, the Society for the Protection of Animals of Alcoy filed a complaint against the ill treatment of the bear at the festival, which was being held in the Alicante town.

Officials for the group claimed the “degrading” spectacle involved the bear being forced to “play a trumpet and dance with a hula hoop.”

The welfare group is campaigning against the legality of using performing wild animals for financial gain. Concerns were also raised over whether such a bear performing in a crowded vicinity posed a grave risk to public safety.

In addition, Nieves Orellana de Molina from the Kimba animal welfare organisation told the Olive Press: “In July 2006, we denounced this shameful spectacle, but the official reply was that the animal was in Spain legally and his owner has all the necessary documents.

“What nobody could respond to was the tremendous damage done to the bear by making him perform such inappropriate movements.”

In response to questions from the Olive Press, Francisco Javier Gutierrez – who claims to be a former colleague of the bear’s owner – explained that he had “spent a lot of time” with the bear and his trainer, who had been checked, he believes, by the SEPRONA (nature protection service) division of the Guardia Civil.

He says the bear is from Northern Europe and “is the only bear in Europe with permission to perform in such spectacles… He used to belong to a Russian circus but lived in distressing conditions from which he was rescued.”

Despite the apparent legality of the bear, Legend Especialistas, the Alicante-based company that displays the animal and runs the medieval market, makes no mention of its existence on their promotional website.

It seems the performing bear exists in a legislative loophole: because Spain is not a country with a history of dancing bears, there is no specific law concerning such animals being used for public performances. In Bulgaria, however – the most high-profile place for dancing bears – the practice has been illegal for almost a decade.

The Eastern European tradition of training bears to ‘dance’ was exposed as a cruel and violent practice, in which the bears were made to stand on hot iron plates forcing them to lift their paws consecutively to try to relieve the pain. Eventually, the bear becomes conditioned to perform its ‘act’ on cue.

Wild animals continue to be forced to perform in circuses and street acts in Spain despite the fact that the European Union, through its Protocol on the Protection and Welfare of Animals, recognises them as “sentient beings,” whose welfare should be considered in the policies of all member state countries.

But, the only Europe-wide legislation protecting mammals – the EU’s Community Action Plan on the Protection and Welfare of Animals – is concerned with animals in farming rather than those in circuses.

And for many, it is simply unfeasible to work towards the “welfare” of circus animals: “It is impossible for a travelling menagerie to provide circus animals with the facilities they need” says the Captive Animals Protection Society.

The Quiros circus, which was held in Granada for ten days in early October, also featured flamenco-dancing chimpanzees and alligators. Much to the pleasure of the smiling and applauding families in the crowd, the wild animals performed human-like acts. However, the Captive Animals Protection Society urges parents not to expose their families to such spectacles. “Children should be taught to respect animals – circuses teach the opposite,” a spokesman said.

In the United Kingdom, undercover investigations have exposed the barbaric techniques used to train wild animals to perform unnatural acts. The most high profile investigation led to the conviction of handlers at Mary Chipperfield Promotions, who used a variety of weapons in training to force animals to perform.

Thanks to such investigations, global attitudes are changing – with countries such as Singapore and Austria banning the use of wild animals in circuses.

“It is widely acknowledged that vertebrate animals can experience pain, suffering and distress,” according to the Born Free Foundation. “Research has shown that keeping wild animals in cramped conditions, in inadequate and unnatural social environments and subjecting them to repeated travel causes heightened stress responses that result in a serious negative impact on animal welfare.”

There is, however, a growing movement for change in Europe: on October 10, 25 Non-Governmental Organisations met with European politicians and supportive celebrities to discuss ways of improving conditions for a million captive animals across Europe. The conference, organised by ENDCAP, a conglomeration of animal welfare and conservation organisations, pushed for an end to the “appalling conditions” suffered by performing animals in Europe.

It is hoped that public protest, combined with the efforts of MEPs to change European law will lead to animals such as Tima being granted a peaceful retirement at least.