A BRITISH toddler has drowned near her parent’s remote farmhouse home. 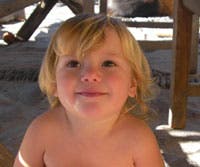 Molly May Counsell, 18 months, was found at the bottom of a neighbour’s swimming pool in 2 feet of rainwater after going missing on February 9.

The girl’s father – John Richards, 61 – described how his daughter was helping him clear up in an outbuilding at their home near Órgiva in La Alpujarra.

“One moment she was with me, then she said she was going to find mummy, who I thought was on the terrace outside.”

But Lucy Counsell, 34, was inside the renovated farmhouse the couple bought in 2000.

After a frantic 20-minute search, Ms Counsell discovered her unconscious daughter in a neighbour’s pool.

After failed attempts to resuscitate the girl, John and Lucy set off for a nearby medical centre but met paramedics on the way, who pronounced the 18-month-old dead.

“I was on the phone to the police asking them to help us when I heard Lucy screaming from next door – I just cannot describe those screams,” John added.

John and Lucy, who are both from Whitby in the north of England, said the loss was “indescribable.”

“Everything points towards a tragic accident,” a spokesman for the Guardia Civil said.

Alex Trelinski - 30 Nov, 2022 @ 14:30
AN Alicante sustainable transport group is claiming that a female Italian cyclist was unfairly harassed after parking her bike on a city pavement. The PCM...