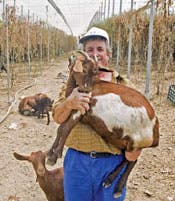 ‘This is war!’ declares Granada farmer as Junta orders 55 goats to be put down

A SHEPHERD is fighting to save his flock after the regional government ordered the animals be put down.

Francisco Justo Vallejo is facing the loss of his 50 goats and five kids after the Junta de Andalucía declared the animals “illegal.”

According to the Department of Agriculture, the Granada farmer does not carry the correct sanitary documentation for the flock, which he keeps at his house in the centre of the village iTRABOafter his cortijo was destroyed by fire in 2000.

And in a bid to put an end to what neighbours claim is a “health hazard,” Junta officials are to send in a team of veterinary surgeons to put the animals down.

“I can confirm that a judicial order exists to destroy the illegal animals, be they ill or in good health,” said regional government spokesman, Juan Octavio García López.

But Vallejo, 50, has declared war in a bid to save his cherished flock.

“If they want to kill my goats, they will have to kill me first. This is war,” he said. “These animals are my life.”

The shepherd denies the flock poses a risk to human health. “I have given the animals all the relevant vaccinations. I want everything to be above board,” he added.

Town mayor Antonio Carrascosa claims the shepherd, who lives in the town with his flock and four dogs, ignored advice from the council to vaccinate his goats. “Vallejo respects nobody. He allows his animals to wander wherever they please. We warned him last year that he needs to have the correct sanitary paperwork to keep so many goats, but he just ignored us.”