YOU could be forgiven for thinking it something from the nib of a Hollywood scriptwriter’s pen. A piglet roaming the hills keeping sheep and goats in check.

But this is no cinematic make believe. A Granada shepherd has dumped the dogs and plumped for a pig to control his flock.

Yes, truth is stranger than fiction. Even in sleepy Polícar, where local farmer Antonio Olvera found the young, female wild boar by the side of the village’s single – dusty – road.

Luisa, as he named her, had been abandoned by her mother and was close to death. Kind-hearted Antonio nursed her back to health and, becoming more of a tame boar, she found herself in the Olvera family’s employ.

“She soon picked up shepherding techniques. Luisa controls the animals with oinks. I have never seen anything like it,” said Antonio, whose flock grazes in the foothills of the Sierra Nevada National Park. 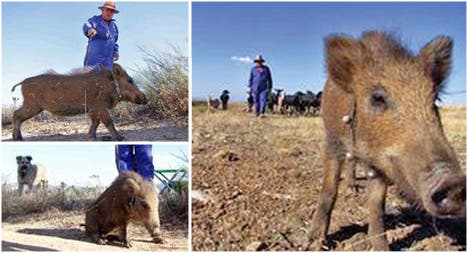