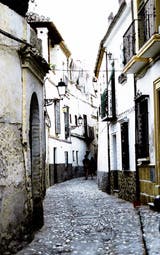 MAINTENANCE work in an historic quarter of Granada could lead to a double probe involving the United Nations and the state prosecutor.

The city council is ripping up the cobblestones that line many streets and pavements in the Albaicín, a medieval Jewish and Moorish residential area which was declared a UNESCO World Heritage site in 1984.

Although city hall officials say the work is “essential” for better vehicle access, local residents claim that the repaving – which will see the traditional stones replaced by granite and asphalt – will jeopardise the barrio’s (neighbourhood) protected status.

And now the state prosecutor in Granada has promised to investigate the legality of the maintenance work following protests from local residents.

This comes after the city’s PSOE political party expressed fears the UN could review its heritage status if the repaving of more than 20 streets goes ahead.

“The Partrido Popular – the political group that leads the city’s council – took this decision to repave parts of the Albaicin without consulting residents or council opposition groups.

“The Albaicin already has enough problems [with litter, graffiti and petty crime] in keeping its World Heritage status. With this, we are sure it will lose it completely,” said PSOE councillor Isidro Olgoso.

Spokesman for residents’ group the Asociación de Vecinos del Bajo Albaicín, Manuel Navarro, told the Olive Press that the council is placing the interests of car drivers before those of the local residents.

“We have told City Hall on several occasions that we do not agree with what they are doing. This maintenance work is destroying a characteristic aesthetic of the zone. They have already put granite paving stones down in some pedestrianised zones of the Albaicín instead of restoring the cobblestones,” he said.

Lucy Ribchester, a frequent visitor to Granada who lived in the quarter from 2007 until earlier this year, believes an essential part of not only the Albaicín but Andalucía will disappear along with the cobblestones.

“This is a great shame. It makes me quite angry that they could be tossing away pieces of history away.

“The cobbles at the San Nicolas mirador (viewpoint), for instance, are beautiful and contribute a real sense of character to the place. It depends how they are replacing them, but if it is anything like the job that has been done on some of the streets leading off calle Elvira, where concrete has been slapped down and not even left to dry before car imprints are made on it, it will make what was a beautiful atmospheric neighbourhood into something quite shoddy and dodgy looking.

“The Albaicin is unique and, since so much of Andalucia’s Moorish heritage has been lost or built upon, it is important to preserve what is still left, as best we can,” she said.