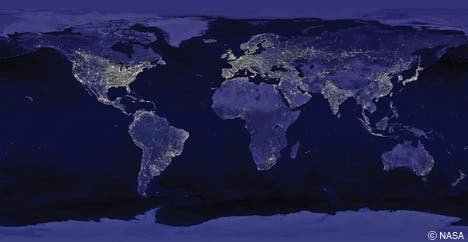 With the launch of the Olive Press’ campaign to eradicate light pollution, PAUL DOWNING explains that turning off lights – or switching to shields – may not only allow us to see the night sky in all its glory, but it may also be beneficial to our health… and that of our feathered friends

SOME of you may recall an amazing photograph, taken many years ago and produced by stitching together a series of images of the Earth taken from space. It shows the pattern of man-made lights that are visible from space and we reproduce that picture here. You can see the cities, marked by intense patches of brilliant light, and also the large, dark areas where man chooses not to live in great numbers – the Sahara Desert, the Outback of Australia – and also the bodies of water, which are truly oceans among the sea of light. 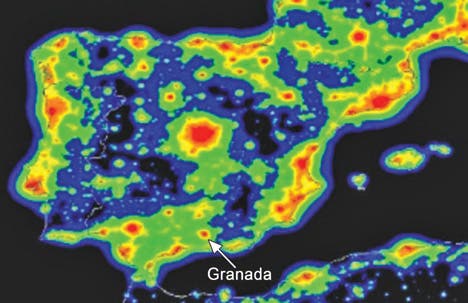 The extent of light pollution in the Iberian peninsula

If you are old enough and can cast your mind back to maybe the 1950s, soon after the World War II ended, you might remember the very few cars on the roads and the scarcity of food in the shops.
But most significantly you may remember that it actually got dark at night.
When I was a boy we could see the band of the Milky Way galaxy, simply by walking into the garden after dark, a sight some of us now have to drive hundreds of kilometres to see. 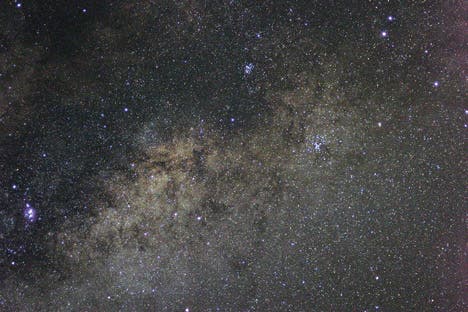 For those city dwellers who have never seen it, the above photograph shows the Milky Way (copyright Paul Downing)

So why has this happened? As technology advanced and electricity became more freely available we discovered that we could light up our towns and cities. A whole industry grew up around making and selling lights, and electricity producers discovered that people were prepared to pay lots of money to light up their houses.
Night time lighting, of course, makes it easier to find our way around; the general feeling is that it makes our world a much “safer” place. But does it?
Let us examine some of the facts.

Most people would agree that we need lights to move around at night. Being able to see our way in the dark is important, to stop us falling down holes or bumping into things. No-one is suggesting we turn off all our lights; it is the intensity which is the issue.
Did you know that the human eye can see quite well from very dark to very bright levels of light? If you move from bright sunlight to complete darkness your eye will slowly adapt to the new light level and, after approximately 20-30 minutes, it becomes one million times more sensitive than it was in full daylight.
Before I go outside for a night of observing the stars, I usually stand in the dark for 20 minutes. After this time I find that I can walk around the house and go up and down stairs, all in complete darkness – except for the light from the stars.
In the process of adaptation, the eye’s ability to see color changes as well, and that is why everything looks black and grey at night.

You would be amazed at how much you can see just by starlight, but turn on just one 60 watt light – even if it is some distance away – and your fully dark-adapted eye will immediately lose some of its ability to see in the dark. The adaptation process has to begin all over again.
That is because it only takes one minute for your eyes to “light adapt,” but nearly half an hour to “dark adapt.”
The reason the eye is able to adapt so much is because physical changes take place inside our it. Rods and cones are the two different receptors used to detect light signals. Rods are more sensitive to light and take longer to fully adapt to darkness; cones take only about nine minutes to adapt but they are less sensitive.
The human eye is truly a most amazing thing.

So we have established that although we need lighting, we usually create far more than we actually need. But does that matter?
Well, it matters a lot more than you may think. Let us look at security lights. They are designed to reveal or deter intruders and to protect our property. They are usually brilliant halogen floodlights, switching on automatically every time a bird or dog or cat goes past.
But did you know that overly bright lighting creates glare and blinds us, not the intruder? Night-time prowlers actually love bright lights, because they have learned they can hide behind the glare and carry out their dastardly deeds undetected.
Just look at the glare created by one badly-designed or ill-installed light, and the second one fitted with a shield to direct the light where it is needed: downwards. 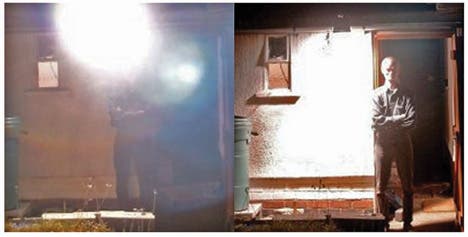 An example of poor security lighting (left) and good (right)

Another important factor is that bright lights can temporarily blind birds, which can lead to accidental death.
Birds migrating at night are strongly attracted to sources of artificial light, particularly during periods of inclement weather. Approaching the lights of tall buildings, other brightly-lit structures or lights pointing up into the sky, they become vulnerable to collisions with the structures themselves.
If collision is avoided, birds are still at risk because once inside a beam of light they are reluctant to fly out of this area into the dark. They often continue to flap around in the beam of light until they drop to the ground with exhaustion.
Thus, outdoor lighting that faces downward instead of up aimlessly into the sky is the best choice when lighting outdoor areas… if only to protect birds.
Above all, we must eliminate lights of this type that illuminate buildings, trees or anything that gets in the way.

And this is one of the main messages the Olive Press wants to convey in this campaign: it is OK to light up our lives, but we need to pay more attention to the type of light we are using. We must also be careful about where that light is pointing.
Some of the photos associated with this article show clearly that bare bulb fittings, globe fittings and non-shielded fittings generally throw up to half the light they produce straight up into the air. Yet well designed light fittings are available and their use can significantly improve the appearance of what you are trying to light.

Two factors are important here. Firstly, the use of shields on light fittings significantly increases the amount of light directed towards the ground. In most cases, it is possible to use a much lower wattage bulb, with up to a 50 per cent reduction in the energy bill and the resultant improvements to the environment.
Secondly, a great deal of energy is wasted from excessive and unnecessary lighting. In many cases shopping and business centres, car parks and even homes remain lit the entire evening even when no one is around.
When you do not need to illuminate something, turn off the switch!

Compare the two examples of the Sydney, Australia skyline. Recently the city switched off most of the lights for one evening, and the results were staggering. 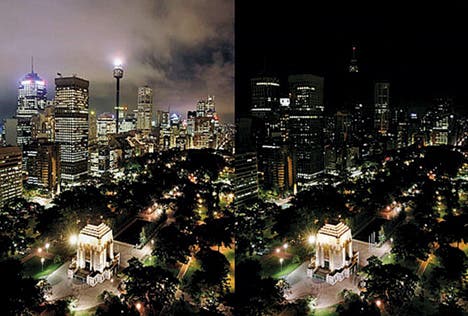 Closer to home, since we moved into the Alpujarra we have noticed a tremendous increase in sky glow, because many of the villages are putting up bright, bright lights without a thought for the sky or for the fact that they are robbing a generation of children of their right to see the stars.
Look at this photo. On the right side we see a house with a “glare bomb” light outside, and on the left side we see the same house with the light switched off. 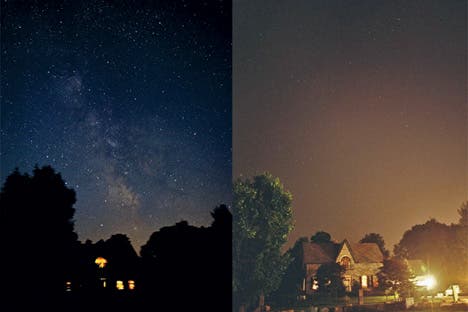 How the night sky is destroyed by bad lighting

To wipe out that magnificent spectacle is such a shame, and that is the route we are taking with our actions in lighting up the towns and villages of southern Spain.

As a final comment, light pollution has negative affects on our health, and is proven to cause increased amount of headaches, fatigue, stress and anxiety.
So do not delay, do it today. Take a look at the lights around your house and ask yourself if they are shielded to prevent too much light going upwards into the sky.
Then take a look at those wonderful street lights outside your house, the signs, the illuminations and yes even the Church. If they are glare bombs, then bombard your local council with requests to shield them or change them so you can once again enjoy what is, by right, yours – an unspoiled view of the heavens.