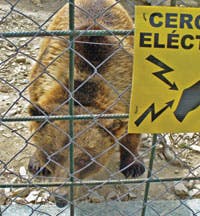 AN Almuñecar zoo is facing renewed calls for its closure after complaints that its animals are enclosed in inadequate, insecure pens.

Both the regional government and animal welfare groups have heavily criticised the Peña Escrita animal park.

And visitors to the zoo have contacted the Olive Press to complain about the “hellish and sickening” conditions in which the animals are kept.

La Herradura resident Mel O’Gorman was shocked to see a Siberian tiger penned into a small, concrete bunker and five lions, which share the same enclosure, “baking without any shade from the Andaluz sun.”

Charity worker O’Gorman also likened the zoo’s Eurasian brown bears to “patients in a Victorian mental asylum.” And the wolves, she claimed, are “poor, mangy beasts that are kept in inadequate concrete and metal runs.”

Now, the zoo could face strict censure after a Junta de Andalucía inspection found deficiencies with the security of certain animal enclosures at Peña Escrita.

The regional government singled out the emu pen, stating it “lacked sufficient barriers to protect the public from the birds,” which can be highly-aggressive if provoked.

In the report, which was written by the environment department at the regional government, the security that separates visitors from dangerous animals, such as the hippopotamus, bears and the lions, “could be improved.”

Currently, the hippo is behind a wire fence, which could easily be scaled by a member of the public, while the lions are kept in a pit, which is also fenced off. Visitors view the felines from above, but the pit could be accessed. The bears are penned in behind an electrified fence and wire meshing.

Following the Junta report, environmental group Ecologistas en Accion has once again demanded the closure of Peña Escrita, which is in the mountains to the north of Almuñecar.

Repeating calls first made in 2005, the group claims the park is “illegal.”

“This park should be closed down as it breaks laws laid down by central government. It fails to meet the criteria that guarantees the conservation of wild animals in zoological parks. The health and well-being of the animals is at risk due to the poor conditions of the enclosures,” said group co-ordinator Javier Egea.

“The dangerous species are not contained within keeps that offer the public adequate protection. The law states that there must be permanent vigilance over these animals and this does not seem to be the case at Peña Escrita. There is a fear some of these may escape. Some fences have been built illegally and some species have been introduced without the correct documentation,” he added.

The town hall in Almuñecar, which owns the zoo, has asked the park’s veterinary surgeon to investigate the claims that the animals are kept in a poor condition. 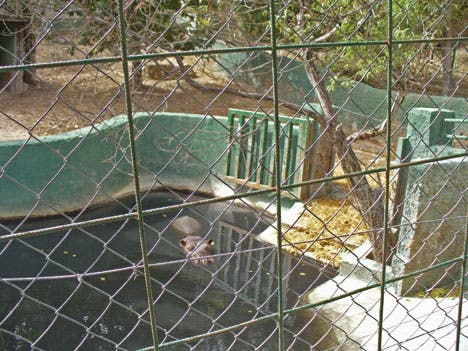 “I was moved to tears”

MOST of us who live here full time do not bother too much with tourist attractions, so it has been at least ten years since I last visited the Peña Escrita.

My husband and I decided to stay overnight in one of the log cabins at the zoo at the end of July and the next morning we made our way down the hill towards Almunecar. What we saw on the bare baking Andalusian hillside on our way down made my stomach turn and my heart groan.

The hillsides are full of compounds containing some of the most beautiful animals in the world. They are the nomads of the steppes and the savannah, from the tropics to the Arctic Circle. Each compound has a well written description of their origin and native habitat.

However, all of these animals are penned in sordid conditions that are almost indescribable. I moved in shock and horror from one area to another alternating from tears to profound anger.

One of the ‘star’ attractions must be the snow white Siberian tiger, barely encased in a concrete bunker that bears no relationship to the size of his natural habitat. The bunker is described as temporary housing. Looking further into the more permanent arrangements for the other animals one shudders to think what accommodation this poor magnificent tiger will end up in. The expression of utter sorrow in his eyes is palpable and it is as if he realises that he has arrived at hell on earth.

All the other animals I saw were in similar awful conditions. There are five Basque ponies in a tiny shelter big enough for one. They never have a chance to run free and feel the breeze in their manes and tails and have fun together.

There are three camels on another hillside in a narrow wire-encased run. They have the company of some llamas constricting an already small space.

The young lionesses also enjoy a completely shadeless caged hillside. Anyone who has enjoyed seeing lions in the wild will know that they hunt in the cool of the night and lie in the shadiest places during the day. One wonders how long it will be before their natural power and feline grace seeps away from them.

The Arctic bears are definitely imbued with the message of despair in their suffocating cages. With their heavy coats of brown fur, the heat must be intolerable in the summer. One of them has lost his mind and moves his head unceasingly from side to side, like a mad patient in a lunatic asylum. The other lies on his back in his tiny cage in the torrid heat panting frenetically and helplessly.

The mangy, noisome wolves live in a metal run with tiny concrete bunkers. They are very skinny and smelly and have bare patches of mange in many places. They look like something out of a horror movie

An animal I have seen so many times running wild and free in southern Africa, the waterbuck with her beautiful baby, was imprisoned in a another small caged area, totally unsuitable for its natural needs.

The hippo pool is fetid, green and stinking- I was glad I did not see the hippo in it. Hippos are superb swimmers and travel great distances underwater using their little protruding ears as gyroscopes to navigate. They need large areas of clean flowing water to practise their aquatic skills.

I avoided locating the baboons and other primates for fear of what I would see and we decided to get out of there as quickly as possible.

We live in a beautiful area with so much potential but the pain and suffering of these animals must impact on all of us along this Costa Tropical and beyond. 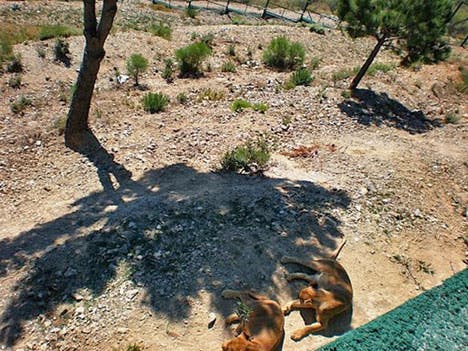