He rose from nothing to become the mayor of Marbella. With his superstar girlfriend and expensive tastes, his face appeared in gossip magazines throughout Spain. Then embroiled in corruption and illegal building scandals, he fell spectacularly from grace. Like a phoenix from the flames, MARK ROULSTON asks if Julian Muñoz can rise to glory once more.

IT was shortly past 5.30pm on October 17 and the doors to Alhaurin de la Torre prison swung open. A gaunt Julian Muñoz, flanked by a lawyer and a bizarrely dressed celebrity stalker called Mocito Feliz, was greeted by a field of microphones and cameras as the regional and national press met the former Marbella mayor on his release.
Muñoz had been behind bars in various prisons around Andalucía since July 2006, when he was arrested as part of Operation Malaya – a crackdown on municipal corruption in the resort town of Marbella. His tercer grado release (whereby he must return to jail between Monday and Thursday before 11pm) on that warm autumn morning made the front pages of newspapers and gossip magazines around Spain.
With his now-former partner, singer and actress Isabel Pantoja, Muñoz became a celebrity during his years in the council chambers of Marbella. Every time the couple strode through the streets of the resort’s pretty old town, they were treated like royalty; the paparazzi was always on hand to document the occasion for magazines such as Hola, ¡Que Me Dices! and Semana.
Although his face became widely-known by readers of the prensa rosa, as such magazines are collectively known in Spain, on the back of Pantoja’s fame, Muñoz had a canny knack of occupying many column inches in the more serious media. And it was not for his political acumen or impeccable taste in sunglasses, suits, shoes and cars that held the fascination of the chattering classes.

This once mayor of Marbella was born 60 years ago this November 24. A native of the northern city of Avila, Juan Felipe Muñoz Palomo, if you were to call him by full real name, studied law and medicine before heading south to try his luck in Marbella.
But menial work waiting on was not exactly what he had in mind as he served tourists in the bars and hotels of the Costa del Sol resort.
Muñoz’s nickname since his first days on the Costa del Sol is Cachuli. The closest translation in English of this is Chancer. And it is perhaps this that helps to explain his rise in little more than a decade from a server of food and drinks, relying on tips to supplement his modest income, to the council leader in Spain’s playground for the rich and famous.
It was Cachuli’s smooth talking ways that first endured him to the notorious Gregorio Jesus Gil y Gil. It was 1991 and the larger than life Gil had just swept to power in Marbella.
Promising to clean the resort’s streets of what he considered lowlifes (the drunks, the drug addicts, the prostitutes and the homeless), Gil’s party was modestly named el Grupo Independiente Liberal – or GIL for short – and was intended as a middle ground between to the PSOE and Partido Popular parties.
Gil wanted average Joes, with little or no experience of politics, to represent the people of Marbella. Among the councillors in this fledgling administration were former waiter Muñoz, who renounced his membership of the PSOE to take charge of organising the town’s fiestas, and a man who was once Gil’s chauffeur: Juan Antonio Roca, who was chosen to head up the town planning department.
It was now boom time in Marbella. Cash was ploughed into the town as housing developments went up seemingly overnight; the like of kings (the now deceased King Fahd of Saudi Arabia), arms dealers (Adnan Kashoggi), weapons smugglers (Monzer al-Kassar) and mafias moved in. 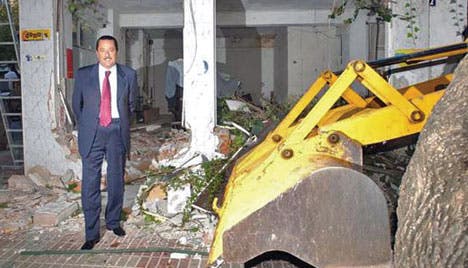 As fast as constructors’ money flowed into council coffers, it went out just as quickly as Gil y Gil and GIL’s empire of corruption, embezzlement, bribery and fraud was built. The megalomaniac mayor, who by this time owned football club Atletico Madrid, became embroiled in scandal after scandal. In 1991, around 270,000 euros was illegally passed from the Marbella town hall to the capital’s second soccer club, between 1991 and 1995 Gil and six other councillors – Muñoz included, the judiciary believes – claimed 27 million euros from the tall hall in false expenses. And then there was the case of tax evasion, totalling 90 million euros, involving 35 GIL councillors.
And while this was going on, constructors were allegedly paying bribes to urban chief Roca for the apparent freedom to build where ever and whatever they so pleased.

Before his death in 2004 from a brain hemorrhage, Gil had served three spells in prison. The first was in 1969 when a block of flats built in Segovia by him collapsed killing 58 people. After 18 months behind bars, Gil paid the equivalent of 400 million euros to the government and was pardoned by Spain’s then ruler, Franco.
In 1999, he was jailed again. This time Gil was found guilty of misusing public funds after he spent the town hall’s money on sponsoring his own football team, Atletico Madrid. After three nights in jail in Alhaurin el Torre and three nights in hospital due to high blood pressure, he was bailed on health reasons.
Then on April 16, 2002, he was sent down for his involvement in defrauding Marbella out of 27 million euros. After paying bail of 700,000 euros, he was released six days later.
Eleven days before this final jail term – on April 5 – Gil was barred from holding pubic office for 28 years. Marbella needed a new mayor and Cachuli was the man. Muñoz had been Gil’s deputy since GIL had won re-election in 1995 (and again in 1999) and he had stepped in to run the town on the occasions that the man who had saved him from waiting on had been incapacitated.
He was voted in with an overwhelming majority and, in local elections one year later, GIL was once again emphatically chosen by the people of Marbella to run the town.

If, during his 11-year mayoralty, Gil had courted controversy in the town with his court appearances and involvement in several high-profile corruption scandals, nothing could quite prepare the people of Marbella for the whirlwind of urban irregularity and self-aggrandisement that is Julian Muñoz, the Chancer.
Between 2002 and today, Cachuli has become something of a World Record holder. He is the public official with the most judicial investigations against him in Spanish history. At the last count, there have been, or there are pending, 100 separate court hearings in Málaga alone for urban offences, embezzlement and fraud.
Included among his past appearances in front of judges are his involvement with the Atletico Madrid case, the false expenses, various irregular land classifications and countless illegal building investigations. Included in these is the Banana Beach probe, which ultimately led to Muñoz being replaced by GIL’s Marisol Yagüe in the mayoralty of Marbella.
Banana Beach was the name of an irregular housing development, which had been erected on protected beach land in the resort. The resulting investigation and court case in 2005 saw Muñoz jailed for one year and prohibited from holding public office for a further eight.
And then we come to his involvement with the Malaya crackdown, which has seen so far more than 100 Marbella councillors, former mayors (including Yagüe), police officers, constructors, lawyers and judges implicated.
The police operation has centred around Juan Antonio Roca – Gil’s former driver, remember. The judiciary considers this ex town planning chief the spider in the middle of the web of Marbella corruption. Police believe Roca has amassed a fortune worth at the very least 125 million euros as he allegedly exchanged building licences for money, which was then channeled through various companies.
Muñoz was detained during the second wave of Malaya arrests. It was July 19, 2006, and police from the UDYCO anti-corruption brigade swooped as he left the home he shared with his then partner, Isabel Panjota. He was charged with bribery and remanded in custody, where he has been since his release on October 17 this year.
His 27-month spell behind bars was punctuated with court appearances in relation to Malaya and other investigations (he, along with five other former GIL councillors, accepted a three-year jail term earlier this year. This was to avoid long-drawn out judicial process of trying the politicians for 70 separate urban offences) and visits to hospital due to failing health and, perhaps most famously, when he went on hunger strike. This was after Pantoja had been arrested for her alleged part in the ring of corruption.
But Muñoz has always remained defiant. During the stint behind bars, he became visibly ill as he was moved around jails in Málaga, Granada and Jaen. Through his lawyer, one Javier Saavedra, who incidentally was also on the legal team of Saddam Hussein and British murderer Tony King, Cachuli campaigned for his release, maintaining his innocence in relation to Malaya.
On October 10, his wish was granted by prison authorities. The following Friday he was a semi-free man… albeit for the time being. On October 24, his intimate knowledge of the inside of a Marbella court room was compounded once more. He was in front of judges to explain why the town hall paid more than three million euros in legal fees to José María del Nido, a lawyer and the president of football club FC Sevilla.
On entering the courthouse, Muñoz told the waiting reporters that “freedom feels good to me.” But if he is found guilty of conspiring to siphon off public money to del Nido, he had better enjoy his libertad while it lasts.
And that is even before any Malaya trial begins.