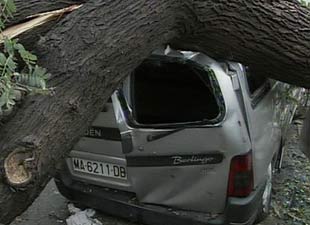 OVER 25 people were injured as a tornado swept through Malaga at the weekend.

Around 200 homes, as well as various public buildings, including the bus station, were damaged in the mayhem that caused damage around the region.

Winds of up to 180kms/hour also destroyed 400 cars and 100 warehouse, as 1000 children were left without classes due to damage to six schools.

Police and the fire service called in all their workers, and a Spanair plane which arrived in Málaga as the tornado hit the city was rapidly diverted to Sevilla.

In Estepona palm trees were blown over, while the Circus ‘big top’ was blown off as people watched a performance.

More snow, heavy rain and strong winds are predicted for the rest of the week.

The awful weather though, didn’t stop 30 members of Arriate’s cycling club Los Mismos from going out on a wet cycle at the weekend.

“For ducks, trees and mountain bikes, it couldn’t get much better,” said one.