After the Olive Press reported that a statue of John Lennon (below) has been moved due to vandalism, Matthew Pritchard explains why it was there and recounts the trip the Beatle made in 1966 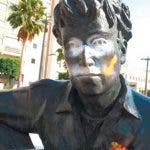 DAUBED in red and yellow spray paint and with his trademark Gandhi-style glasses ripped off unceremoniously, the statue of John Lennon sits in the corner of a council warehouse sad and forlorn.

Moved due to an orchestrated act of vandalism – including the tuning pegs and eventually the neck of his guitar being smashed off with a crowbar – it is currently awaiting to be re-sited, “probably near to a bank or building society”, admits a town hall spokesman.

It is an ignominious fall for arguably Britain’s most talented musician, sadly unknown, even less respected, to many of the youth of modern day Spain.

The statue by Spanish artist Carmen Mudarra had been unveiled in 2006 to mark the 40th anniversary of the Beatles extended trip to the region.

The Lennons sang to the ghosts they believed haunted the mansion

Adding to a street also recently named after the Beatles, it was hoped that the statue would become a proud memento for the city, where few know that Lennon wrote one of the bands biggest hits Strawberry Fields Forever, often termed his magnus opus.

Lennon had arrived in Almeria in the spring of 1966 to play the part of Private Gripweed in Richard Lester black comedy How I Won the War, filmed for the most part in the province’s Tabernas desert.

He stayed for a total of six weeks and after living briefly in a beach front apartment he rented Santa Isabel, a magnificent 13-bedroom property on the outskirts of the city.

Accompanied by his first wife, Cynthia, he was visited by fellow band member drummer Ringo Starr, and even had his famous black Rolls Royce shipped in from the UK. 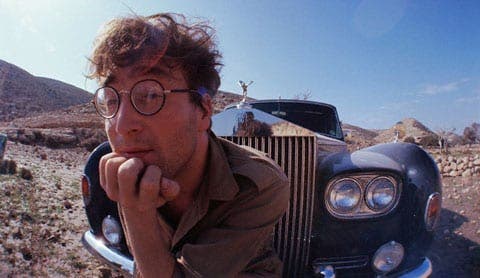 But incredibly until just a few years ago almost nothing was known, or written, about his famous sojourn to the region, best known abroad for its Spaghetti Westerns and more recently plasticulture and protests against illegal housing.

The fact that any of his stay – let alone enough to warrant a commemorative street and statue – is largely due to the efforts of one man: journalist and Beatles fan, Adolfo Iglesias.

Iglesias, who works for the La Voz de Almeria, had got interested in the story after reading an old interview in which Lennon mentioned the lovely villa called ‘Santa Isabel’ he had stayed at in Almeria.

“I was surprised that the city was ignoring what seemed to me to be an important part of its cultural heritage,” says Iglesias. In particular he was puzzled by one of Lennon’s references to Strawberry Fields Forever when the singer said: “It was written in this big Spanish house, part of it, and then finished on the beach. It was really romantic.”

Iglesias soon discovered other mentions of the villa in a series of old books on the band, one in particular in Cynthia Lennon’s autobiography called A Twist of Lennon, in which she described it as being haunted.

He discovered that the Lennons had begun to fall in love with their huge new lodgings with its big stretch of lush greenery – an oasis in the desert landscape around Almeria.

“It’ll take days just to explore this place,” John apparently said as they moved in. Ringo was even more enthusiastic about the villa, from what he wrote in his autobiography: “You expect all kinds of heroes with swords to come swinging round the corner on a chandelier! What a great place for parties. I was convinced beyond all doubt the villa housed many beautiful spirits.”

Writing of a candle-lit party held during a power cut he recalled that it was “an incredibly magical experience” in the villa as the Lennons, actors and crew from the film “sang to the ghosts” they believed haunted the mansion.

Iglesias’ search for the house was complicated by the fact that it was a long way out of the city centre and had laterly become known as la Casa Romero.In fact, it was only thanks to the chance discovery of a name plaque hidden by weeds atop a gatepost that he was able to confirm his discovery.

When he managed to track down the then-owner of the property she confirmed that Lennon – as well as several movie directors – had once stayed there.

It turned out that the owner wasn’t impressed with Lennon and his entourage, regarding them as unkempt hippies, even though Lennon’s hair had been cut for his film role.

Iglesias began to research exactly what the star had got up to while there.

His investigations revealed a number of fascinating anecdotes that offer insights into the character of both Lennon and the people of Almeria at the time.

Lennon had his black Rolls Royce shipped out to Almeria complete with hifi and fridge, prompting old women to cross themselves thinking it was a hearse as he roared down the dusty streets to the film set.

But within days it had broken down (or was it sabotaged?) leaving him reliant on taxis to get to and from the film set.

Lennon quickly established a routine of using the same taxi driver and on the final day of filming he offered to pose for a photo with the man.

“But the taxi driver had other ideas,” said Iglesias.

“He looked Lennon square in the face, pointed at an actor dressed as a clown and said he’d rather have one taken with him.” The photo remained one of the taxi driver’s most treasured possessions right up until his death.

Perhaps because of this lack of attention, Lennon looks happy and relaxed in the numerous personal snapshots of the star Adolfo has managed to collect. One of them even contains Lennon’s address in London which he wrote down for a member of the Spanish film crew, telling the man to look him up if he was ever in England.

Adolfo is also convinced the visit marked a crucial turning point in the music legend’s life. Lennon’s stay forms a neat hiatus between the two eras of the Beatles: the 1962-66 period, which saw them tour constantly; and that of 1967 -70, when they decided to concentrate solely on studio work.

As the longest period he ever spent away from the Beatles, it seems Almeria gave Lennon time to ponder his future: in interviews later on Lennon admitted that it was there he first considered leaving the band.

His stay in Almeria also marked a change in his physical appearance, adopting the famous wire rimmed Gandhi-style glasses he was to wear for the rest of his life.

“Lennon normally wore contact lenses but in the film they wanted him to use glasses,” said Iglesias. “However, because he wasn’t used to wearing them, he kept leaving them lying around between takes and losing them. In the end he just decided to keep them on permanently.”

It seems a group of local children also unwittingly contributed to Lennon’s decision by repeatedly stealing his glasses from his Rolls Royce.

“They probably thought they were having a bit of fun at a foreigner’s expense,” Iglesias chuckles. “In fact, they were helping to create one of the most iconic images of 20th century music.”

The semi-derelict Santa Isabel property – which was also rented by actor, Peter O’Toole, and Bridge on the River Kwai producer, Sam Spiegel – is currently being renovated and transformed by Almeria council into a museum of cinema.

It will fittingly include an exhibit dedicated to Lennon’s stay there, with memorabilia of the musician and a section dedicated to the song Strawberry Fields Forever.But while the public waits for the museum to open, one of the main questions about Lennon’s stay in Almeria has never been answered. That of why he named his most famous single Strawberry Fields Forever and what had prompted him to write the song that could be said to mark the changeover for the Beatles from pop band to serious musicians?

Iglesias has an intriguing theory. He notes that the original wrought iron gates of Santa Isabel (now in council storage) bear an uncanny resemblance to the gates of the orphanage of Strawberry Field in Liverpool (Lennon added the “S”) where the musician used to play as a boy.

At the same time the huge expanse of lush vegetation could resemble the orphanage’s vast grounds, which the young Lennon loved to explore.

“Hopefully one day we will know for sure,” he explains.