WHEN the Olive Press broke the story that MP Margaret Moran had improperly warned neighbours off her land with official House of Commons notepaper in 2006, we quickly received legal letters from her solicitors.

Forced to retract the claim in the next edition, it came as a big surprise – and irritant – when months later a neighbour of her holiday home in Granada actually produced a copy of one such letter.

In green ink, and apparently in her handwriting, it read: “Please note – this road is private & closed. Please remove your motorcycle from our land.” 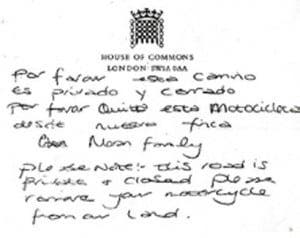 It took great restraint not to run the story on our front page.

Now, however, the Labour MP for Luton South has become embroiled in the murky MP expenses scandal, which last week led to her resignation.

Already forced to hand back 22,500 euros wrongly claimed for dry rot at one of her three UK addresses, she is now in hot water over using House of Commons paper after a complaint was filed.

It also emerged that she even claimed for the 900 euro bill from the leading libel lawyers, who she had used to sue the Olive Press – and UK newspapers the Mail on Sunday and Observer.

Last issue, we revealed how on top of the three second homes she owned in the UK, the socialist MP had made money renting out her four-bedroom villa in the Alpujarras.

“It was completely against the spirit of the Alpujarras”

Today, we are proudly printing the letter she allegedly pinned to the gates of her farm, warning neighbours not to use paths to their homes that had been used for 20 years.

The note – which was hastily scrawled – was “one of several” she allegedly wrote and used two years ago.

Its owner Stuart Powell, who has lived nearby since 2002, said: “It was extraordinary to find a note with the House of Commons emblem stuck on my bike. It was clearly meant to intimidate me but I just thought it showed the arrogance of the woman and kept the note to stick up on the wall above my toilet.”

Beatriz Moschopoulou, 56, who lives next door, said: “They were stuck on trees, on vehicles that had been parked on the path, and eventually on the gate that barred us from using the only track available to access our property.

“It was completely against the spirit of the Alpujarras, where people have coexisted for years and used ancient paths to move their animals and access their homes.”

Meanwhile, Moran’s former estate manager Hagai Scharf confirmed that Moran had kept a big stack of House of Commons stationary in the house.

“There were often big piles of the official notepaper that she used to use,” he told the Olive Press.

“She used to leave notes every time she came. There were plenty of them. She did not like to speak to people, she would instead leave notes on cars or on the gate of her house. There were all kinds of warnings. Most of them were on official paper because that is what she had in the house.”

Scharf, who organised her lettings and looked after the property for six years, continued: “I think she used them because she felt she was being ignored by all the neighbours, and wasn’t getting the respect she felt her position as a politician deserved.

“I think she felt using them made her more important and got people to listen. But really we just felt sorry for her.”

The Olive Press revealed in 2006 how Moran had illegally blocked off paths leading to the homes of a dozen neighbours near her farmhouse in Carataunas, near Orgiva.

We explained how she had been denounced by the neighbours, who held protests outside her four-bedroom home, which was rented through agency Rustic Blue.

Eventually a Judge ordered that the MP and her brother John, with whom she joint owned the house, had to reopen the paths. She lost an appeal.

Since the scandal of the UK MPs expenses broke three weeks ago, Moran has been one of the worst culprits.

As well as “flipping” her second homes to maximise the allowance, she allegedly used her staff and official House of Commons paper to help her husband’s company EQN get business.

Under Commons rules office resources and staff are supposed to be used solely for Parliamentary duties.

The MP, who had some of the highest expenses claims over the last ten years, claimed for 26,000 miles of travel expenses last year alone, or enough to get to her Luton constituency from Westminster over 407 times.

She was ordered to appear in front of Labour’s specially set up Expenses panel last week amid calls for her resignation. Campaigning TV presenter Esther Rantzen has vowed to stand against Moran as an independent if she doesn’t resign before the next General Election.

WHEN we broke the story of MP Margaret Moran’s disdain for centuries-old tracks through her land in 2006, we showed a distinctly non-socialist side to this Labour MP.

Cutting off access roads to a dozen neighbours, she behaved “like an Imperialist from the days of the Raj,” said one local.

And then there were the notes; the prodigious notes she scribbled to warn off neighbours. To keep them off her land, to remove their motorbikes, and to generally throw her weight around. Each apparently written on the classic House of Commons notepaper she had stacked up in the home.

While she sued the Olive Press at the time for printing this fact, it now emerges she not only put the huge legal bill through as expenses, but she DID actually use the paper.

We know this because we have a copy, which we proudly printed on last week’s front page.

And what an appropriate symbol the portcullis at the top of the notepaper is. For last week, the portcullis finally fell on the checkered career of Margaret Moran, and not before time!