A GRANDMOTHER, who started a popular blog two years ago, has died aged 97.

Maria Amelia Lopez, whose grandchildren introduced her to the internet, passed away in the Galician village of Muxia. 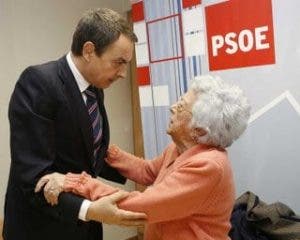 Her posts touched on many aspects of her long life, from political memories of the Franco era to intimate musings on her increasingly fragile state of health.

In one she wrote: “On December 23rd 2006, my grandson gave me a present, this blog when I was 95 years old … and my life changed … now, I can communicate and interact with the world.”

Her blog, at amis95.blogspot.com, became a global hit, notching up more than 1.5 million visits. As her fame spread, Mrs Lopez became an unlikely campaigner for digital rights for older people, and even took tea with the Prime Minister Zapatero.

“When I’m on the internet, I forget about my illness”

In one of her last posts, in February this year, she wrote: “When I’m on the internet, I forget about my illness. The distraction is good for you – being able to communicate with people. It wakes up the brain, and gives you great strength.”

Mrs Lopez became the world’s oldest blogger on the death of 108-year-old Australian Oliver Riley in June 2008. The new holder of this unoffical title is unknown, although the actor Kirk Douglas, 92, who blogs regularly on his MySpace page, could be in the running.

Twitter’s oldest microblogger is the 104-year-old Briton Ivy Bean, who keeps her 14,600 followers entertained at twitter.com/ivybean104.