ZORRO star Antonio Banderas has been ordered to hand over a huge chunk of his Marbella garden.

The Spanish heart-throb must give up 1,243 metres square – essentially a wide strip located at the south of his luxurious property.

After a five-year battle, Banderas must hand over the land, which is public, according to the new town plan for Marbella.

The move is likely to ensure Banderas’ house will finally be legalised, with the public finally getting access to the beach. 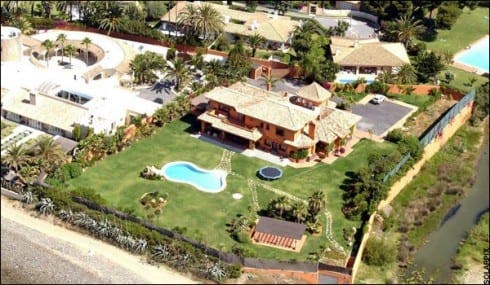 The house, called La Gaviota, in Los Monteros, has a history of controversy. It was built on the beach – on land designated for public use – and was declared illegal in 2003. The encroaching land was reclassified for the construction of showers and a changing room, two years ago.

Speaking then, Banderas, famous for his role as the swashbuckling Zorro star, said: “I see myself like a snail, with his house ready to move.”

It originally received its licence in 1993 when the town plans had been illegally redrawn by former mayor Jesus Gil.

The house, built by a journalist, was bought by Banderas in 1997.