On New Year’s Day a total of 18 roads in the region remained closed for the forseeable future.

The record rainfall, which has seen over 400 litres falling in many areas in under a week, caused dozens of rivers to burst their banks.

The highest rainfall fell in Grazalema, where the town saw 709 litres per metre cubed fall since December 21.

Since September 1,200 litres have fallen in Spain´s wettest town, which is 60 per cent higher than the average for this time of year.

Algeciras saw 400 litres of rain, while Torremolinos saw 322 litres in under a week.

In total over 2000 cubic hectometres of water have entered the reservoirs in Andalucia over the last ten days.

This is 20 per cent of the total capacity for the region.

In total the region´s reservoirs stand at 56 per cent, compared with 35 per cent for the same time last year.

Some of the worst flooding was in Jerez where the Guadalete river burst its banks leaving 2000 homes flooded and dozens of families cut off.

The La Ina area was worst affected, while 26 houses were affected in Las Pachecas.

The water authority confirmed that the river was at its highest level for “over 100 years”.

In Granada two houses were swept away by floods in Guadix, while two electricity lines were blown over in Cadiz.

There was “incalculable” damage to farming land in Almeria, while 18000 homes in Jerez were cut off from water.

The Junta has confirmed it is studying an action plan to pay for the damages to the region.

Luis Pizarro confirmed that the emergency services had attended to 5000 of the 8000 calls they had received.

Both the Malaga, Cadiz and Granada authorities have so far appealled to central government for financial aid. 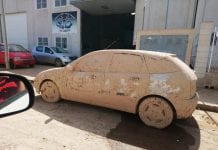