SOME years ago I was invited to Saudi Arabia to partake in an all party investigation into something important.

I can’t quite remember what it was, maybe the price of eggs; when it’s an all expenses paid trip the subject doesn’t really matter.

I do recall at the time being a trifle concerned because Saudi Arabia is of the Muslim persuasion and liquor stores are notoriously few and far between.

In the event I needn’t have worried as I soon discovered that you can drink whatever you like as long as you do so out of a tea cup. It’s all about image you see.

The point is that when we called in at our embassy in Riyadh the ambassador thought we might enjoy a guided tour of the souk so off we pranced through the narrow and crowded alleyways, fending off offers of carpets, jewellery and more silver and gold than you could shake a stick at.

But it wasn’t the enthusiasm of the various salesmen (they were all men) that has stayed in my memory.

What is still vivid is the sight of Arab chaps proceeding through the market followed by six or eight wives each of whom were identical, dressed from head to foot in black burkas. 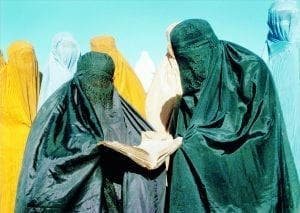 The question that came to my mind was: How do you know if the eight wives that travel home with you are the same eight that you took out? In Riyadh women must remain covered when in public so any error in mustering one’s wives would not be discovered until you got them home.

A real wife might still be wandering the souk or have gone off with the wrong husband.

What brought this memory flooding back was the news that the mayor of Coín has banned the wearing of burkas in public buildings in the town.

There are, after all, a number of women for whom the burka is a blessing

Now I have absolutely no idea how many burka-wearing Muslim women there are in Coín – I suspect not many – but I would counsel caution before this bye-law is enforced.

There are, after all, a number of women for whom the burka is a blessing and The Lady Bartie’s appalling sister Maude is the prime example.

Her facial features could curdle milk at twenty paces and it would be a kindness to everyone else if she was compelled to cover up before venturing into any public domain.