A 17-year-old twin has been arrested for the brutal murder of Maria Esther, 13. 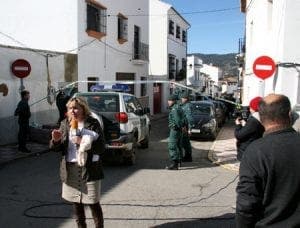 The youth – who sources have told the Olive Press had a “troubled personality” – was first questioned the day after her body was found two weeks ago.

According to local sources, the boy, who had been in trouble at school, was currently working part-time with his father as a builder.

But this did not stop him going out regularly late at night.

One police source revealed that when they had asked him about a cut on his hand he told them he had been bitten by a dog.

“It was this that first made him a suspect.”

One mother, whose son was in the same class as the accused at school, explained they grew up together but after the age of 12 had drifted as he went off the rails.

“I wasn’t that surprised as I knew he had got involved in certain activities.

“But he comes from a really nice family who were always very hard-working,” she said.

A local midwife who lives on the same street added: “He has been in and out of trouble since the age of 12, unlike his twin sister who has gone on to study at college.

“And we always knew he had problems.”

However, one of his close friends revealed that many people are still doubtful.

Carmen Peralta, 23, said: “When I first heard it was him I didn’t believe it.

“We have always got along so well and a group of us actually spent New Years Eve together in Setenil.

“I saw him on the street yesterday at the bus stop and he was acting completely normally.”

Police arrested the teenager at his home in Arriate and took him to Ronda.

So far only one arrest has been made but it is believed others were implicated in the murder.