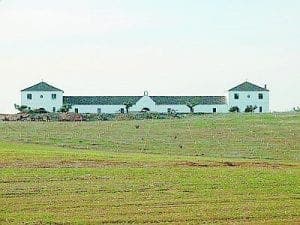 TOWN hall officials of a small Granada village are angry that no-one felt the need to inform them that Britain’s future king would be staying there.

Villagers in Illora are already up in arms over the huge estate – where Prince Charles and Camilla are due to stay next week – which they claim has illegally annexed almost 1,000 hectares of rolling park land.

They insist that the land, which is part of the Duke of Wellington’s Dehesa Baja estate – one of Spain’s largest – should not have been given to the British aristocrat.

Citing recently uncovered documents, they claim the land in question was actually ceded by the Crown to the local town hall in the early 19th century.

The demands are being led by socialist mayor Francisco Domene, who has put it into the hands of lawyers.

He believes that a return of the land “would bring important prosperity” to the inhabitants of Illora.

It is now in the courts, with a judge set to rule on the case later this year.

The rest of the 5,000 hectare hunting estate – which was awarded to the Duke after the War of Independence in recognition of the family’s help against Napoleon – has become a celebrated millionaires playground.

Both the Prince of Wales and his sons have previously hunted at the estate now owned by Lord Arthur Charles Valerian Wellesley, son of the present Duke of Wellington.

Wellesley, who went to Eton and Oxford, has entertained a string of dignatories including Princess Caroline of Monaco and socialite Gemma Kidd, who is married to his son Arthur.

The stay will round off Charles and Camilla’s official three-day Spanish visit at the end of this month.

During the trip – which the Olive Press revealed last issue – they will meet Prime Minister Zapatero, before visiting a Repsol biomass plant near Madrid. They will then journey on to Portugal, before heading to Morocco.