IT has rained all night. The house, which is old, cowers beneath the battering downpour.

Its beams creak their discomfort. Its ghosts shiver as do we waking at dawn to the pallid, ashen light seeping through the shutters. Five Winters have passed since we first occupied it when the bustling crew of builders finished their magic. Later we will discover Night’s secret: Sierra de Lujar enshrouded in snow. We stand in awe, inhale its chill, silent, still until the unbearable cold pleasure drives us indoors.

The villagers caress our arms. They have come to talk about the house, at least the older people.

We have become the house: they stroke and smile and speak in simple affectionate terms about their memories: 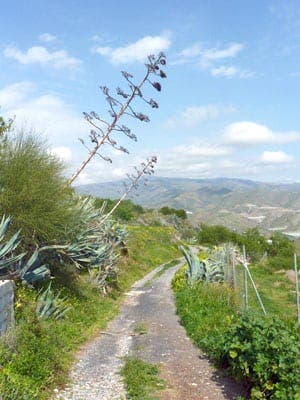 My grandmother cooked here; this was my mother’s bedroom, and so it goes on. They look at our renovations but see something quite different. Old men play cards in a corner.  They are boys again.  See, can you see over here we danced and chatted. Here were their early fumbling attempts at love and the dark corners blush with their telling. The house is a palimpsest and they are its archaeologists. They are inscrutable denizens of the village. Their lined faces hold secrets like ancient runes.

I have seen them in the morning perched in the Plaza like roosting pigeons, along the benches in all four corners. They are Paco and Miguel, Joaquin, Eugenio, names too esoteric for our Anglo Saxon ears. They are the sons of those same names, sitting, watching, waving a walking stick now and then to punctuate an argument, wrapped in cardigans, shod in felt slippers. Do they think about the house or the terror of their early days: brother against brother pitched up in a bloody conflict?

The women lose themselves in activities, a sisterhood safe in their solidarity. They tend their men folk, keep home, love their children possessively. You can see them in the small fish market, animated creatures, loud in their familiar places, unashamed laughter, unashamed opinions rattling the air in the cold stone space. The fishmonger waits; he is at once servant and master, king of his silvery, slimy wares.

The women court misery: their names insist on obeisance, goodness, redemption: Mercedes, Angustias, Dolores, Maria. And yet those who are old must surely know what the house knows, what the choking trenches know beneath their winding sheets of weeds and windblown earth.

A man shuffles behind his mule to the edge of the village. I do not recognise him. He is nobody and all men. The mule trails a long flat rope. It is so long that the man must hold it half way between the mule’s rump and the rope’s end. Half the rope is in front of the man and half behind so that it appears as his tail, perhaps eight metres long. The mule lopes and the man shuffles and they have become one mythical beast, patrolling the paths to the village outskirts towards the forbidding stony Campo, beneath the desiccated foxholes. The mule comes to a halt at the village edge. It is framed in its atavistic terror. Its ears twitch, nostrils flare in agitation; its eyes roll in an instinctive response to what we cannot see.

I have seen this before, years ago, skirting a valley’s edge above an isolated cortijo. Between the cortijo and where I stood, a white mare, hobbled could sense the terror of what was to come. The shrill squealing of a huge hog presaged what was to follow. The horse tossed its head in despair and as the flashing blade dug into the pig’s throat, the sickening stench of spilled blood ripped up the valley side, past the mare to where I stood.

We follow the path of shale and dog turds, past the sloping agarves down the track to the soughing reeds along the whispering arroyo. These too, know such secrets as nightmares are made of and from here we ascend beyond the shattered limestone bones and blunt stumps of beehives past all that is broken or crumbled made by man to the dugouts cicatrised round the lumpen hill.

The day grows warmer as we ascend and the air is redolent with the crush of rosemary, lavender and thyme beneath our boots. No one is here but us and the droning bees to witness the scene. We scale the hill and reach the crumbling dugouts. These are the trenches, once a Theatre. What comes to my mind? Theatre of Cruelty; Theatre of the Absurd; Revenge; Tragedy of Blood.

Picking our way back past the festooned almond trees we are relieved to reach once more the gurgling creek.

We who have not known war have not known the shrieking shell, the flash of blade seeking bone and flesh, have not trembled in those living graves, can shiver in the morning as the pale ashen light seeps through the shutters, can stand in awe at the white shrouded mountains and wonder at the secrets within the creaking beams of this solid ,old, house and smile.

Miguel, costa wine and The Contraviesa

Gualchos: Back on the track