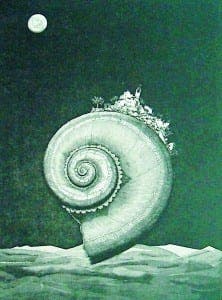 GAUCIN’S artists are opening their doors to art lovers from around the region.

Transforming the town – often referred to as the ‘balcony of the Serrania’ – into a living gallery the annual Art Gaucin Open Studios event takes visitors on an art route around the classic pueblo blanco.

Now in its seventh successful year, the event, taking place from May 26 to 29, gives visitors a unique opportunity to meet artists in their own studios and to buy work from them directly.

And in addition to the group’s sculptors, painters, printmakers and photographers, this year will also showcase four guest artists, including London-born painter Gabriella Chidgey who lives near Ronda.

“People come from all over the place, and we often get other artists visiting,” explained British photographer Vivienne Whiffen, who has lived in Gaucin since 1985.

“It is always fun and there is a great variety of styles.” 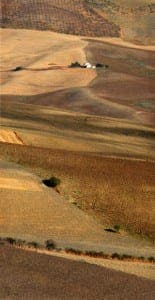 She continued: “We are an interesting group that ranges from super professionals who exhibit in major museums to the self taught. I myself am somewhere in the middle.

“But the key point is that we are not Sunday painters and we all make a living from this.

“And we are all Spanish speakers who have lived in the area for many years.”

The group – who come together twice a year to organise the annual event alongside another exhibition before Christmas – also have high-profile individual exhibitions.

Jim Rattenbury, for example, has recently had a successful exhibition in Zurich and will be showing his work in Norway later this year.

Meanwhile Victoria Orr-Ewing and Sebastian Fisher are having exhibitions in London, while Paddy Robinson had a successful exhibition of gouache paintings of India. Jenny Waterhouse and Lesley Riddough are to exhibit in Grazalema in July.

Guest artists, who include Chris Klees, Sara Webb and Antonia Grzegorzewsk, are adding to the already varied mix.

Portrait painter Gabriella Chidgey, who has been based in Ronda for six years, said: “It is an honour to be included in such a talented and successful roster of artists.”