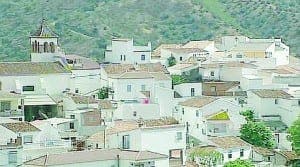 IT was set to be the first ‘gay’ village in the world.

But, somewhat sensibly perhaps, the ‘pueblo blanco’ of Moclinejo (above) has opted to reject a much publicised plan to turn its streets pink.

The ambitious project – the brainwave of gay entrepreneur Javier Checa – involved painting all the village’s 300 houses pink, changing the names of streets to honour gay artists and even creating a park designated for outdoor sex or ‘cruising.’

It offered a somewhat novel solution to the economic crisis for the Axarquia settlement, struggling with high unemployment.

And Checa – organiser of Andalucia’s upcoming international fair Expogays in Torremolinos next week – promised it could transform it into ‘a kind of Ibiza in the Axarquia… where gays are completely free [to do what they want].’

But despite initially welcoming the unusual idea, Moclinejo town hall is simply not ready to come out of the closet.

While it has agreed to build 50 so-called ‘gay’ homes, to be marketed at Expogays exclusively for homosexuals, the village of 1,127 people has ruled definitively that it is not going to hold a referendum to paint the houses pink.

“We are not against any group, but we are not ready for the changes at this stage,” explained Mayor Antonio Munoz. So what does this decision say about Andalucia’s attitude to homosexuality?

Is turning its back on a gay village a rebuff to the homosexual community or an acknowledgement that the quirky idea is nothing more than a gimmick to tap into the so-called ‘pink pound’? 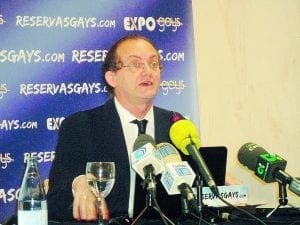 Checa (left) has lamented the decision.

“Only building 50 houses will not make this a destination for gays; I am gay and I know what the community needs,” he told the Olive Press.

But not everyone agrees with his viewpoint.

In fact, somewhat ironically, the main criticism levelled at the project is that it is homophobic: you can’t paint all gay people with the same (pink) brush.

“It is discriminatory and segregates people for purely political and economic reasons,” said Salvador Rubio, president of the Lesbian, Gay, Bisexual and Transgender Collective (COLEGA).

“This will not promote equal opportunity, it will create ghettos,” he added. “We fight for the freedom of individuals so that they can freely decide where they want to live.”

Meanwhile openly gay writer Shangay Lily argued that the creation of a gay town would wipe out the progress of the last few decades of democracy.

“They act as if the laws that protect us do not exist, as though we have to lock ourselves in ghettos because our life is in danger outside,” he said.

Certainly the laws in Spain have changed quite drastically in the last decade.

Since 2005 Spain has become one of only 10 countries around the world that allows same-sex marriage and its laws are some of the most progressive, for example allowing adoption by same-sex couples.

There are more than three million openly gay people in Spain and the country attracts millions of BLGT (bisexual, lesbian, gay, transgendered) travellers every year without having to paint all the walls pink.

Spain is very liberal these days, in some ways more so than in the UK

According to Michael Asher, 54, who runs Hotel Montejaque with his partner Jonathan Fraser Howells, 43 – an agent for the UK Conservative Party – Andalucia is already a great place for the gay traveller.

“Personally I have never experienced any hostility,” he explains. “And although that doesn’t mean it never happens, generally Spain is very liberal these days, in some ways more so than in the UK and by and large I think Andalucia is gay-friendly, especially on the coast,” he explained.

“Of course Torremolinos is a very popular destination, but many gay men and women also want more cultural things such as visits to Granada, Sevilla and Cordoba.

“Not everyone fits in one category, and I don’t like targeting individual groups,” he added.

“Some hotels advertise that they are gay-friendly as they want to appeal specifically to that market but as a gay person that wouldn’t make me choose that hotel. I simply pick a hotel that I like the look of.

“That said I think Expogays is a good idea as it opens up the market and says gays are welcome here.

“And of course there is the issue of the ‘pink pound’ which exists for the simple reason that gay couples are more likely to have good jobs and no family.”

Certainly any discussion of gay tourism must stress the influence of the ‘pink pound’ – a term often used in the UK to refer to the spending power generated by gay consumers.

The group is assumed to be less likely to have children and more likely to have greater earning potential with less daily outgoings and more disposable income to spend on shopping, going out and holidays.

It is no wonder therefore that it has established itself as one of the most important consumer sectors in today’s society.

According to the International Gay and Lesbian Chamber of Commerce (IGLLC), there is a global market of between 39 and 55 million gay consumers in 15 countries whose spending power is extremely high.

Together the group represents six per cent of the population of these countries and has a potential purchasing power of 2.1 trillion dollars, occupying fifth place in the world economy.

In Spain alone there are more than three million gays, with a purchasing power of 72 billion euros.

And according to 2009 market research by the Spain Tourism Institute (Turespaña), the average gay tourist has an expenditure of 130 euros a day, which is a staggering 30 per cent more than other tourists.

In fact, Ian Johnson of Out Now Consulting believes money is the biggest factor driving the gay travel market forward.

“There are more and more destinations, airlines, hotel groups chasing the lucrative pink pound,” he explains.

With the Costa del Sol boasting sun, sea, and heady nightlife, it’s perhaps not surprising that a chunk of this ‘pink’ money is spent in Andalucia.

The most popular gay travel destinations in Spain are Sitges, Ibiza, Gran Canaria, Benidorm and of course Torremolinos, where the second Expogays festival is to be held on October 14 to16.

According to Checa, Spain needs to emphasise its importance as a destination for gay tourism because it is the fourth most valued country among the gay community after the United States, Britain and the Netherlands.

Expogays will mark the largest concentration of gay-friendly businesses in Spain with 180 stands and visitors expected to exceed 10,000.

But according to festival spokesman Pablo Martinez, it is not about businesses tapping into the lucrative ‘pink pound.’

“It is not about trying to make money from the ‘gay’ market but it is about bringing to light businesses that are often left in the shadows,” he explained.

“It is about bringing them into focus, into the mainstream.

Events due to take place include the Costa del Sol Gay Cinema Festival offering films within the LGTB genre, the Gayvision Song Festival, the European Gay Chess Championship, the Gay Dance Championship and a singles night for gays.

Judging by last year’s standards, it looks certain to be a success and highlights a new wave of tolerance that has swept across the country in the last decade.

Andalucia is now a fantastic place for the LGBT traveller, but the real aim should be equality and not the pink pound.

Businesses will be happy to take money whatever colour it is and being gay friendly should be a necessity for all, and should not need to be advertised.

Ultimately, you really don’t need to paint the walls pink.

Cristina Hodgson - 26 Jun, 2022 @ 10:30
EXPERTS foresee a higher concentration of jellyfish on the Costa del Sol this summer due to the currents of the Alboran Sea and a...