IT came in a flash and was over in 10 minutes. But – without a doubt – as the clouds parted over Comares, I had one of those precious moments in life.

Looking out from my guide Antonio’s rooftop terrace I could suddenly see for miles. A 360-degree view down to the sea and inland to up to a dozen villages nudging the distant Sierra Almijara mountains.

It took my breath away and was the perfect reminder of why we had settled in this atmospheric village when we first moved to Spain nearly a decade ago.

A true bird’s nest, we had arrived via the incredible A-7000 route from Malaga through the Montes de Malaga natural park.

With our clapped out old Subaru loaded up to the gills, it was certainly an adventure attempting a road, which according to the map had a double loop in it.

As it turned out we couldn’t have found a better way to arrive at our first rental home, where I planned to write a book and my wife was to concentrate on painting.

The scenery was not only spectacular, but we ended up stopping at random at 400-year-old Venta Galway – which took its name from an Irishman, who moved there when the British market couldn’t get enough of the area’s sweet muscatel wines.

From here we had the perfect introduction to the confused geology of the Axarquia (from the Arabic sharquiyya, meaning the eastern zone), a ham-shaped wedge that cuts inland from the beach resorts of Torre Del Mar and Nerja.

A region of 31 villages, there was clearly plenty on offer and we soon discovered how rich the area was for culture and increasingly for its food and wine. 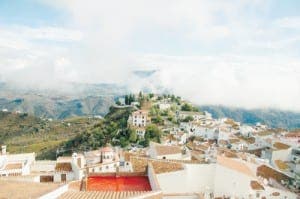 The Axarquia (pronounced Ass-Ikea) has not always been so visitor-friendly though and dauntingly, as one guidebook points out, the region has only been safe for tourists for the last few decades.

Indeed, it has often been fabled as one of Spain’s most inhospitable zones. Long known as a haunt for bandoleros, or bandits, who preyed on traders carrying goods to Granada, it was also a popular route for smugglers bringing contraband into Spain from Africa.

Such was its volatile nature (the coast was regularly attacked by Barbary pirates) that the area’s inhabitants built fortified villages, with watchtowers in the hills inland.

The region is completely steeped in a dramatic history of rebellion, resistance and renaissance. The evidence is all around: churches built on mosques, streets named after revolutionaries, inns dedicated to highwaymen.

Battlefields meanwhile litter the area and it was here – in Comares and Frigiliana, in particular, at ‘El Fuerte’ – that some of the last few battles were fought between the Christians and Moors during the Christian reconquest of Spain.

Later, it became a hotbed of republicanism and after the Spanish civil war in the late 1930s became one of the key escape routes and hideouts for left wing soldiers.

From here they launched frequent guerilla attacks against dictator Franco’s victorious army, and weren’t officially beaten until the mid 1950s.

Their leader was a ruthless, charismatic character named El Roberto and legends about him and his band still circulate among the villages of the Axarquia today.

Dissected by deep ravines and criss-crossed with streams, it is easy to see why it was such a hard area to pacify. The confusing pattern of rutted hills mean that journeys that look tiny on the map can, and usually do, take hours.

But that is very much part of the Axarquia’s charm, a bucolic landscape of whitewashed villages and due to a fabulous microclimate, plantations that include – unlike anywhere else in Europe – mangoes, avocadoes and bananas.

It wasn’t until Moorish times however, that the region began to truly thrive

“It has a wonderful microclimate stretching all the way up to Periana,” says landscape gardener Lee Talbot, who has lived here for years. “You don’t get extremes of weather and almost any plants will grow given water.”

Its mountainous borders – that include Maroma at over 2000 metres – serve a double purpose, protecting the region from extremes of temperature and also drawing in moisture to aid its agricultural sector, which has managed to survive despite the recession.

First inhabited by the Phoenicians, who planted acres of vines, and later the Romans, it wasn’t until Moorish times however, that the region began to truly thrive. Part of the cultured kingdom of Granada, great fortified towns and palaces went up and it was here – as mentioned – that the Moors made some of their last collective sighs, before being vanquished, via the Reconquest, back to Morocco.

There is certainly much evidence of their civilisation, particularly in the main market town of Velez-Malaga and the heart of Comares, where in the claustrophobic Calle del Pardon, 30 families of Moors, were spared their lives after publicly converting to Catholicism.

Velez-Malaga was once praised by Ibn Battutah, the greatest of Arab travellers, as “a beautiful city with a fine mosque and an abundance of fruit trees”. Although now surrounded by modern development, the old town is well worth visiting – Cervantes passed this way as a tax collector and mentions Velez in his epic Don Quixote. 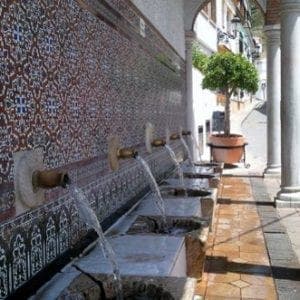 Like Malaga it also has a Moorish fortress rising above it with battlements, but unlike Malaga it has a fascinating old medina, crammed full of interesting nooks to explore. Its old town has recently been given a special protection status and no less than 47 historic buildings have been specifically listed.

Head inland and you will find a range of charming places, such as Colmenar, a centre for bee-keeping, Alcaucin (above) with its amazing location by Vinuela lake, or Riogordo, a curious place, stuck in a dip in one of the region’s many folds.

A gritty town, full of run-down houses and troll-like men in caps, it’s worth a stop to suck in the atmosphere of Real Spain. It has a half-decent museum of antiquities, and most importantly a great place to eat, the Lemon Tree in the heart of the town.

Driving back towards the coast, you should certainly take a poke around Periana, perhaps stopping at Cantueso for lunch.

Finally you will arrive on the coast at Torre del Mar, once a huddle of poor fishermen’s dwellings, but now a popular tourist resort, particularly for Germans and increasingly Spanish tourists. According to one story, things took off when a local builder built apartments to house a string of Malaga businessmen’s mistresses.

It is a surprisingly bustling place these days with a lovely beach and views… But be aware, while there may be no more bandoleros, there are a good many more elderly tourists clogging up the hotel rooms, not to mention sunbeds. 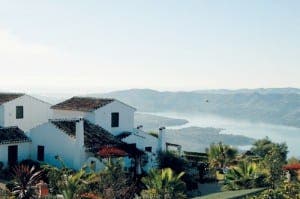