EXPATS who hanker after the ancient woodlands, cobbled footpaths and stone walls so typical of walks in the UK will love Aracena.

The landscapes here are more reminscent of Hardy’s Wessex than of Cervantes’ Spain with luscious green hillsides, thanks to some of Spain’s highest rainfall figures.

This is classic walking terrain, and best of all, the Natural Park of the Sierra de Aracena y Los Picos de Aroche  encompasses an impressive 184,000 hectares. So there is no shortage of places to get away from it all.

I have long been a lover of this area and came close to buying a farm here a few years ago.

The six walks described in my book Walking in Andalucia take in a string of pretty villages which, until just 50 years ago, were connected to one another by an elaborate network of drovers’ paths.

Most walks follow these century-old thoroughfares, which fan out from the villages by way of cultivated huertas where small groves of citrus alternate with carefully tended vegetable plots.

In many places the original cobbling remains intact and there are long sections of path which run between old stone walls, covered in mosses and lichens.

Although the scenery here is less wild or rugged than in other Andalucian mountain ranges – you’re always aware that the hand of man has been instrumental in fashioning the landscape – there are few areas which offer more attractive walking than the Aracena Park.

Both long and short-distance  paths have recently been waymarked and the region is bound to attract a growing number of visitors.

For the time being though, there are few walkers, gradients are for the most part gentle and the itineraries I’ve chosen are generally easy to follow.

Here is one of my favourites:

THIS exceptionally pretty circuit leads through oak and chestnut forests from Galaroza to the tiny village of Castaño del Robledo. The Jabugo river valley teems with birdlife and the walk is an aural as well as visual feast. It would be tempting to linger along the way and perhaps to picnic in the shade of an oak somewhere beyond the Capilla de Cristo. From the high path you follow back towards Galaroza you’re treated to wonderful views west towards Portugal. Put time aside to explore both villages which have excellent bars, restaurants and some good lodgings, too.

The route
The walk begins in the main square of Galaroza, La Plaza de la Constitucion, next to the fountain. With your back to the town hall turn left, then bearing left again head away from the square past the Toribio restaurant.
Soon you pass a small supermarket, descend past Bar La Fuente then pass a pretty palm-fringed square before coming to the main road leading from Aracena to Portugal, the N-433.
Cross the road, turn left in front of Cafe bar Venezia and head along the main road towards Aracena. After 80m you reach a sign marking the beginning of the path La Ribera de Jabugo – the Jabugo river valley walk.
Turn right here and drop down a narrow path. It soon becomes cobbled, bears left and just 80m from the road reaches a junction. Here cut right.
The narrow path runs between two walls, crosses a water channel then reaches another junction by an open tract of ground. (10 mins)

Bear sharply left and descend. You shortly cross the Murtigas stream via a small stone bridge then pass a sign explaining the eco-system of the valley.
The path widens to become a broad, sandy track which cuts through stands of oak, pine and chestnut while beneath you in the river valley are thick stands of poplar, ash and willow.
The track narrows again to become a path as it passes behind a stone hut, running parallel to the River Jabugo’s left bank.
Passing a wooden bench the path soon runs past a group of white buildings, Las Casas del Tortero, where it merges with a broader track. (30 mins)

The track runs past a number of farm buildings then merges with a broader, better-surfaced track. Soon it descends, passes a pylon then crosses a small concrete bridge to the Jabugo’s right bank.
Beyond the bridge the track bears left. At the next junction, just past an ivy-covered building, bear left and after passing an information board (it lists the edible mushrooms that are to be found in the valley – setas comestibles) you cross the river once again.
You soon pass the entrance gates to the farm of El Tortero, continuing along the left bank of the river.
After angling left away from the river on a pretty, narrow path which is cobbled in sections you reach a farm with a water butt on a metal platform. Here bear hard left, picking up a broader track which runs past a number of smallholdings. There are cobbled and concreted sections. Passing by a cross you reach the outskirts of the village by a marker post and a newly built picnic area where there is tap water. (1 hr 10 mins)

Here, bearing slightly left then hard right, you follow Calle Soledad round the edge of the village. It soon runs up to meet with the main road next to a bar and a ham shop. If visiting the village centre, head straight across. There are a couple of small bars where you could break for refreshments.
Turning left along the main road you pass a bus stop then a ham warehouse and the Senorio de Encinas restaurant. Climbing for another 125m be ready to cut left away from the road along a track which leads in to a picnic area next to a small shrine, La Capilla del Cristo.
Pass the chapel to its right and head up a broad track that climbs up through the forest. Views soon open out towards Jabugo and, beyond, to the mountains of Portugal.
The track heads on up through groves of chestnut to reach a junction. Ignore the track which cuts left towards two sets of farm gates: you should bear right, sticking to the main track. You’ll occasionally see faint yellow and white P.R. waymarking. The track soon descends, narrows down, then reaches a junction with a broad track. (1 hr 45 mins)

Here head straight across: you’ll see P.R. markings and a sign for Galaroza. After 50m you reach a fork: here bear right.
The path widens and continues its descent. Shortly you reach a point where the track divides: take the left path and, continuing to descend, reach another junction where it splits three ways.
Take the middle path. Pines give way to oaks and, after passing two new houses and an older one to your right,  you pass the farm Finca La Farruca whose shed walls have been adorned with a number of wierd sculptures.
The cobbled track passes a number of small farms, running on between stone walls. Soon you cross the Murtigas stream for the second time in the walk via a concrete bridge.
You climb a final steep section of cobbled track which bears right, then left, before running up to meet with the N433. Bear left and follow the road to the outskirts of the village.
Just past a small shop which sells touristy paraphernalia turn right off the N433 at a sign for Consultorio.
Follow this street past Bar Avenida then at its far end turn left at a sign for Centro Poblacion and head up Calle Fernando Marquez Tirado which soon becomes Calle Vitoria
Following Calle Vitoria to its far end, keeping right at a No Entry sign, you should then cut left down Calle San Sebastian.
You pass a public phone booth then, sticking to your same course, come to a church and a large square. From here keep on in the same direction passing the Cajasol bank.
After angling left past a large brick building continue along Calle Don Gumersindo Marquez to arrive back to your point of departure, la Plaza de la Constitucion. (2 hrs 25 mins)

Add 30-45 minutes to all timings if you plan to visit Castano de Robledo. 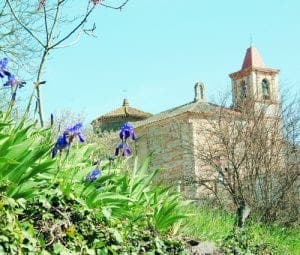