AN expat couple whose home suffered extensive flood damage have been left fearing for their safety.

June Squirrell, 70 and her husband Reg, 78, are terrified of further flooding having narrowly avoided being swept away in the heavy rain a fortnight ago.

The couple, from Bromley, are lucky to be alive after a torrent of water overwhelmed their property in Villanueva del Rosario, when two nearby rivers broke their banks.

The pensioners, who have lived in the house for eight years, had to be rescued by neighbours after being forced to escape through an upstairs window.

“It was horrific, it was like a tsunami coming through the house,” said June.

“It knocked down a wall, ripped the doors off their hinges, and swept our cars away, we didn’t stand a chance.

“The water came through the house like a raging torrent and I was screaming for help, we didn’t have any time to collect our belongings.

“It is just devastating, we have lost everything,” added the former mental health worker.

The couple’s problems began when heavy rain started to fall on the evening of September 28, some of the heaviest rain in Malaga’s history.

By 5am on Friday the river running along the end of their garden had broken its banks, and by 7.30am the house was standing in rapidly rising water.

“The water was two metres deep in the house and the mud left behind after the water receded was so deep it was going over the top of our wellies,” added Reg, a former council worker.

Despite the town hall sending a digger to clear the worst of the mud, the couple have been heavily dependent on an army of volunteers to help with the clear up.

They have been amazed by the support of the local expat community after their insurance company failed to offer them more than half their annual premium.

“So far they have only offered to give us a few hundred euros, but we are still fighting them for more.

“We are in our 70s and have just celebrated our 50th wedding anniversary,” an emotional June continued.

“We have put everything into this house, it is all we have. We spent our money to make the house lovely – it is what we saved for – but we will never feel safe in this house again. 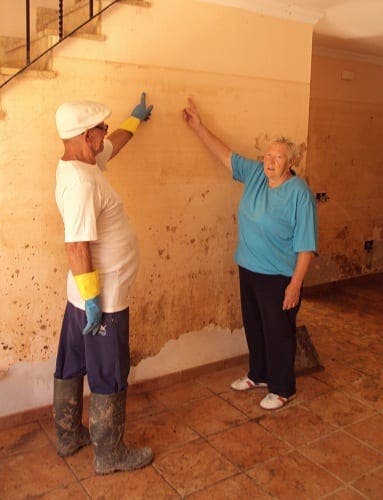