A SPANISH artist has made headlines around the world by creating – and then destroying – 10 giant sculptures spelling out the word ‘Kapitalism’.

Santiago Sierra, 46, created letters in 10 countries using local materials before arranging for them to be publically eaten, demolished or burnt.

He completed his project by setting fire to a 3.6 metre high ‘K’ made from pine and hay in Melbourne last week, having spent two years slowly spelling out the mystery word (see picture right).

“The project showed my feelings and desires, and my desire is for the destruction of the capitalist system,” he said.

“It’s a criminal system that is putting humankind on the border of extinction.”

Sierra began the Destroyed Word project in Sweden in 2010, where the word ‘capitalism’ is spelt with a ‘K’.

His first letter was ‘M’, created out of concrete and then later destroyed using demolition machines (see picture below).

In the Netherlands he made a giant ‘S’ out of fruit and vegetables which was later devoured by pigs.

“I realised I had to make a global piece. I am a gypsy in a way, I travel and make art everywhere,” said the Madrid-born artist, who also made and destroyed works in India, Iceland and Papua New Guinea. 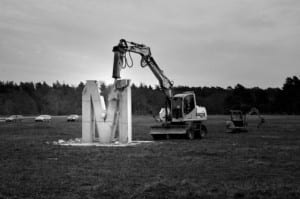