SCIENTISTS in Spain believe they have discovered what sabre-toothed tigers ate nine million years ago.

By studying fossil sites in Cerro de los Batallones near Madrid, researchers found the big cats had a liking for prehistoric horses.

To arrive at their findings, researchers studied carbon from the animals’ tooth enamel.

Dr Soledad Domingo, of the University of Michigan, said: “Analysis indicated that horses were very feasible prey of these cats. 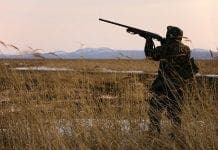 A gruesome legacy: The history of shooting in Spain