A GIBRALTAR MEP has called on the EU to investigate whether new restrictions on the sale of tobacco discriminate against Spaniards living near the border.

Recent legislation introduced by the Spanish government restricts the number of cigarettes people living within 15km of the frontier can bring into Spain from the Rock.

The figure has been reduced to 80 cigarettes each month, compared to 200 previously.

Liberal Democrat MEP Sir Graham Watson has now called on the European Commission to investigate whether or not this is a fair policy.

In questions tabled in the European Parliament, Watson points out that the same policy is not applied to Spaniards bringing tobacco into the country from Andorra, Ceuta and Melilla.

“With VAT and duty being lower in Andorra as well as Melilla and Ceuta, these territories represent a threat to customs revenue similar to that posed by those entering Spain from Gibraltar,” he said.

“In light of this, does the Commission consider that a consistent, fair and non-discriminatory approach would see similar thorough checks also being required at these frontiers?”

Guardia Civil officers seized a total of 7,898 cartons of cigarettes and 299 vehicles in 484 separate incidents at the Gibraltar border in January. 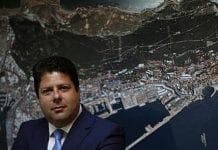