HE became the oldest man to ever win the Tour of Spain.

But organisers were horrified to discover that Chris Horner, the American winner of the ‘Vuelta’ had literally disappeared just hours after his victory.

It came as Spanish doping authorities arrived at his Madrid hotel on Sunday to test him for banned substances.
The 41-year-old had only just been crowned the winner of the tour, after the final stage of the month-long race in the capital.

It has since emerged, that the request to test him had actually come from the US anti-doping agency, however when officials from the Spanish cycling federation arrived at the Hotel Ciudad de Mostoles, he and his wife had apparently left. Neither his team mates nor his manager could account for his whereabouts.

A team doctor said he was in a different hotel closer to the airport, but when officials arrived he was not there.

As the Olive Press went to press, he had still not been located, despite being due to arrive in his home town in Oregan, USA, on Monday.

In an email Horner had written to the authorities, he had made clear his movements. The note, released to the press, read: “Hello. The Vuelta finished today, September 15 in Madrid, and I will fly back to my home in Bend, Oregan on the 16th. I will be staying at the Hotel Ciudad de Mostoles, room 314. I will be locatable there between six and seven in the morning.”

It is not known whether the US body will continue its pursuit once Horner is back on home soil. The debacle is the latest scandal to rock the sport, with Lance Armstrong recently banned for life for taking drugs and numerous other cyclists under suspicion or banned. 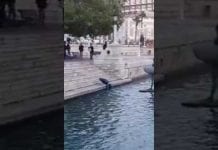 FLEW TOO CLOSE TO THE SUN: Watch cocky American tourist attempt jump onto statue of Icarus in southern Spain and painfully fail