A SPANISH boiler room conman has been handed 10 years in prison, for his role in a transatlantic investment fraud scheme.

He is the last in the group of well-known fraudsters, who swindled nearly €100 million out of their victims, to be sentenced.

The trio were earlier handed a combined sentence of more than 42 years in July 2013.

Greasy-haired Pope (pictured left), 56, was a regular to the Costa del Sol, according to Olive Press sources, and ran a number of call centres on the coast.

The Hertfordshire boy, a former insurance consultant from St Albans, is said to have become close friends with seasoned fraudster Nigel Goldman. 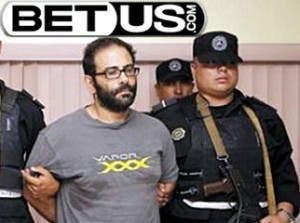 “Several agencies worked tirelessly for many years to bring Hartman and others to justice and to provide restitution to the victim investors in this case.

“These criminals will all serve just sentences for the fraudulent schemes they devised and live differently than the opulent lifestyles they grew accustomed to,” he added.

The scheme, which swindled thousands of investors between 2004 and 2008, employed a global network of fraudsters, based in Spain, the UK and America.

It was finally brought down after a seven year transatlantic investigation involving a host of law enforcement agencies, from Spain to Florida.

The international gang set up call centres across Spain, using the identities of several fraudulent US-based companies, to sell the fake stock.

Money stolen from the victims was used to fund the gang’s extravagant and luxurious lifestyle.

A private aeroplane, a 55ft yacht, and several expensive cars – including a Ferrari Daytona Spyder – were among the assets seized.

Do you know any of these men and where they worked or socialised. Please contact the Olive Press in strictest confidence at newsdesk@theolivepress.es or call 951 273 575