ESTEPONA is rarely considered a place for a package holiday. It is just far enough away from Malaga airport to be classed a ‘long way’, and with Marbella closer, why would anyone bother going that extra distance?

But therein lies this special town’s appeal and the reason it is loved equally by locals, expats and tourists in-the-know: It hasn’t let its strong Andalucian flavour be diluted by high-rise hotels and characterless concrete development.

But it has still allowed diversity to flourish, with a range of bars, cafes and restaurants from different cultures thriving in the melting pot of a port and its beautiful historical centre.

Behind the long, soft, sandy beaches is an old town rich with history and littered with monuments from its Phoenician and Roman days, when it was known as ‘Estebunna’.

Plaza Ortiz perfectly connects the main commercial street Calle Real with the beach. It also boasts one of Estepona’s most popular bars and a regular pit-stop with the younger generation in the shape of Tolone. The bar’s owner, American expat Kristi De Groot, explained that the town’s social scene is growing exponentially.

“All of the businesses in this area work together and help each other out, we sell food from all our neighbours,” explains De Groot, a biologist, who has lived all around the world. “It creates a real community.”

She has lived in the town for a decade, having started in the bar as a waitress before buying it nine years ago.

“Estepona is a wonderful place once you get to know it,” she continues. “You can live a very tranquil and safe life here, while feeling like you’re part of a fun and evolving community.”

And she’s not wrong when she says ‘tranquil’, as 90% of the time when I ask my flatmates how they are I’m met with the same reply: “tranquilo.”

This chilled out town still knows how to fiesta though, with regular events throughout the spring/summer season. There is a big dog show, a tattoo festival, a ruta de tapas and, in April, the annual jamon cutting championship.

A surprisingly intense spectacle, I watched as eight ham cutters lined up, facing eight hams and eight sets of knives, but there could be only one winner…they carved to the death.

The same weekend labeled ‘Vives Sus Calles’ also saw a great outdoor concert which drew thousands of people, along with events and exhibitions throughout the daytime. 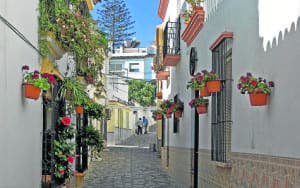 But Estepona’s main ferias are in May (to celebrate San Isidro, the town’s patron saint) and an even bigger one in July, lasting a week and coaxing the whole town out to drink, socialise and party in the sun.

The May festival which kicks off on May 15 normally lasts for four days and includes a livestock festival, a bullfight and various events and concerts. The highlight however, is the local townsfolk who wear traditional costumes and serve up food and drinks from their houses in the centre.

The favourite dish, Sopa de Campera, is a mix of vegetables and bread. Make sure to try it with sangria, of course. It is easy to get lost when attempting to navigate through the centre, but that is not a problem as each new road leads to a different plaza bursting with flowers, orange trees and quaint benches where locals sip coffee.

The old town centre has gone through a major rejuvenation over the last year, in particular with the pedestrianisation of all its central streets. As well as repaving them, the town hall have put in thousands of new plant pots in each of the old streets, with colours chosen by the locals.

Look out for Plaza de Manilva where you will find gems such as Longmans bookshop, run by two expat sisters. Sadly though it is soon to close – after 34 long years – to become an arts and crafts centre, as the Longman sisters finally retire. Calle Real and the connecting streets are home to most of Estepona’s shops, including many clothes shops, leather boutiques and quirky bakeries.

Although be warned, shopkeepers still cling defiantly to their traditional 2pm (even 1.30pm) siesta unlike most of the rest of the coast. Since Easter arrived and the sun has begun to shine a little brighter, outdoor seating has spread through the streets and plazas like wildfire.

Plaza de las Flores was a quiet place earlier in the year but if you go there at the weekend now you will find the ornate square filled with tables and chairs. It’s the place to go for ice cream and churros, but also houses a number of good bars delivering cana beers to tables by the tray-full. Interestingly, this plaza was originally the town’s bull ring.

Walking along Estepona’s spacious, palm tree studded promenade leads into the town’s port, buzzing with life and popular with holiday-makers.  The Louie Louie bar has become famous around Andalucia for its regular concerts, featuring bands from around the world, while Reinaldo’s at the port entrance is always alive and kicking.

Restaurants to suit all tastes can be found, with a strong theme of fresh seafood, understandably. Although Estepona no longer relies on fishing as its main source of income like it did fifty years ago, dozens of fishing boats can still be seen exiting and entering the port. 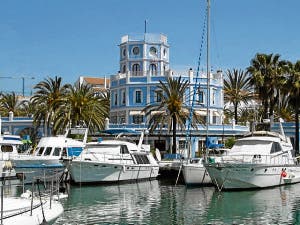 “The port at five in the morning is the best place to be in Estepona, when the fishermen come in laden with huge fish it is so exciting and noisy, you can even pick up the fish they drop,” said Carola Dalmau, an English teacher who moved to Estepona from Madrid as a child.

Fisherman and wholesalers gather round as the catch is iced, auctioned and then transported throughout the region. Evidence of this can be smelt throughout the day though, with a strong fishy whiff permeating the port’s working end.

Estepona is built on an intriguing history; it was destroyed by the conquering Christians in the 15th century and rebuilt by Queen Isabella and King Ferdinand almost a century later.

In 1729 Philip V granted the town a charter for 600 families to reside there and the town has continued its growth to this day with around 60,000 people now living there officially, although that number triples in the summer. And the melting pot of cultures which forms the town is still very much evident today.

From the scattering of watchtowers warding off the Moorish invaders to the Arab-built clock tower and the 16th century castle ruins, the place is awash with history. Another of the town’s most popular attractions is the old Franciscan monastery which is now the Church of our Lady of Redemption. Built in the 18th century, the church is formed by three vaulted naves and a tower which provides spectacular views of the whole town.

Many tourists though are understandably drawn to Estepona by its expansive beach, dotted with chiringuitos specialising in sardines on the spit. To the west is the wonderful El Cristo Beach, an increasingly popular cove which also runs events during the summer and has even hosted the odd wedding.

The area also boasts a string of high quality golf courses such as El Paraiso, Atalaya and Estepona Golf. Some of the coast’s oldest courses, the former two in particular are extremely flat, built well before land became a premium on the coast. 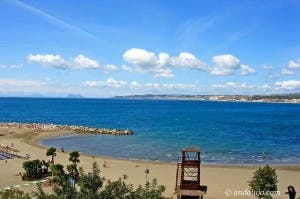 Behind the town stands the mighty Sierra de Bermeja, so called because of its slightly red colour. “This is the tranquil heart of Estepona,” explains lifelong resident Antonio Lopez, 36. “From here you can see the beautiful town, the sea, Gibraltar and the Moroccan mountains.”

It is an amazing place for a stroll, a serious hike or even a couple of days camping. Most importantly it counts on the famous Pinsapo pines, the world’s third oldest trees, which are amazing to see. Some as old as 10,000 years old, they are beautiful in the extreme.

The perfect foil to the pretty streets of the town centre.