A BRITISH couple claim their accountant stole €22,000 from them after forging court documents.

Expats Mike and Jean Lett insist that the disgraced Estepona councillor took the money on a number of occasions and illegally reinvested it in his own name.

The couple, who run furniture business Jean’s Emporium in Estepona, had used Manuel Reina Contreras for eight years for their business.

They have denounced the former PES councillor – who is also being investigated over the multimillion euro Astapa corruption scandal – and their case is now going through the courts.

“We cannot believe this man could get away with this. He saw a way of getting quick money and he took it,” Mr Lett, 72, told the Olive Press.

The Letts – who have lived in Spain for 28 years – had given the money to Contreras to prevent a court from repossessing a hotel they owned in San Roque.

The accountant had told them that Estepona court needed the money if they were to prevent a foreclosure on the building that they were in the process of selling.

However, as it later emerged, the court had never solicited the money at all and both requests and receipts from a judge were allegedly forged.

“This is where our real problems started,” said Mrs Lett, 68, from Newquay. “One time Contreras even drove me to the bank to withdraw the money, because he said if it wasn’t paid into the court that day everything would be null and void.

“Each time we would pay the ‘rent’ money to him, he would provide us with an invoice which he said was from the court.”

However, they started to suspect Contreras and decided to get their lawyer to look into the situation. 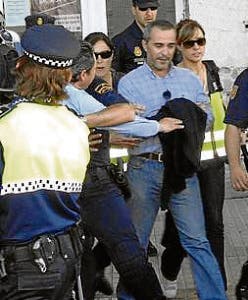 “It was at that point we found out that all was not as it seemed and the documentation supposedly from the courthouse was forged.”

It turned out it was not the first time Contreras had been on the wrong side of the law.

In June 2008, he was arrested alongside Estepona mayor Antonio Barrientos, in a complex web of corruption involving fraudulent land re-zoning, bribery and money-laundering.

The former Councillor for the Economy at Estepona town hall was one of five people remanded in custody in the Astapa case.

Now, despite numerous requests for the return of their money, the Letts haven’t seen a penny and the hotel has been repossessed.

When contacted by the Olive Press, Contreras said this week: “The only thing I have to say is that I have made mistakes. I have a lot of problems and my priority now is to solve them.

“I feel bad about what I have done to these good people, and I only hope I can pay them back.”