A MASSIVE wildfire in Competa which forced more than 600 residents to flee their homes is being investigated as arson.

It took 23 aircraft and 400 emergency service personnel to control the blaze which raged for several hours, ravaging 200 hectares of forest land in the Sierra de Tejeda mountain range, one of Andalucia’s well-known beauty spots.

The fire started along a riverside hiking trail beside the Competa-to-Canillas de Albaida motorway, which has led the authorities to suspect arson. The Junta’s councillor for Malaga, Jose Luiz Ruiz Espejo, said: “We are trying to determine whether it was intentional or the result of bad farming.”

Although no injuries were reported or homes lost, substantial damage was caused to the exteriors of properties, including gardens and porches. The government’s helpline has dealt with over 100 claims for damaged property, 80% from resident expats who were forced to evacuate.

The Junta has promised to do everything possible to restore the area once reports on the full effect of the fire have been completed. 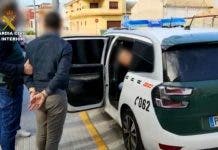