THE Spanish National Police have arrested 27 used car dealers for the oldest trick in the book: dialing back cars’ distance gauges to sell them at a higher price.

The investigation was launched after a man bought a car in Toledo thinking it had 87,000 kilometres on it, only to find out it actually had traveled 207,000.

Now, some 48 falsified cars have turned up in five provinces, hailing from 24 separate dealerships.

But those are only the ones that got caught. Authorities have reported that only a small percentage of falsified cars ever get discovered by their owners.

The equipment needed to turn back odometers can be bought online from anywhere between €100 and €200, as low as 10% of the profits auto dealers stand to make from dialing back the numbers on one car.

Used car sales are up 4.5% from last year, putting a record number of Spain’s population at risk for being scammed. According to the Federation of Associations of Automotive Dealerships, two used cars are bought for every new car purchased in Spain.

Used car owners can protect themselves by looking up the mileage records on any car’s inspection reports, which since January 2014 have been tracked by the National Department of Traffic. 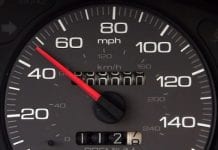 Car dealers trip up over turning back odometers