A JET-SETTING feline has made his way to the UK… all the way from Spain.

Dribbler – named due to a jaw injury that causes him to drool at mealtimes – was found in Lichfield, 24 kilometres north of Birmingham.

After the continent-hopping cat was found starving in a backyard, he was taken to the local vet.

Veterinary nurse Emma Wood found a microchip in Dribbler’s collar that revealed his home was in Spain.

Dribbler became an overnight celebrity in the town. Residents were amazed that such a tiny creature could make the journey across Spain, France and, most shockingly, the English Channel.

The same trip would have taken 24 hours in a car.

Despite the jaw injury, the intrepid cat hasn’t been put off his food and is now back to full health after being cared for almost a month. 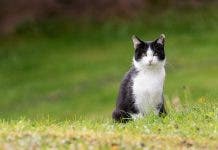