HAIRY motorbikers and sporty mountainbikers hug the curvy road like a well-loved woman but if you’re a motorist going to Gaucin, wear a seatbelt!

The ‘Camino de Gibraltar’, as the old road was known, was built by the Romans to provide access to Gibraltar and the sea from Ronda. And not a great deal seems to have changed, judging from the potholes.

But brave the long and winding road to this classic white village and your courage will be rewarded as you arrive in a picturesque pueblo which seems to collapse in on itself.

Colloquially referred to as ‘El Balcon de la Serrania’ (Balcony of the Serrania de Ronda), Gaucin has a foothold halfway into one of Andalucia’s most stunning mountain ranges.

Originally settled by the Romans and extended into a military fortification by the Moors, the village is rich in history. The Camino de Gibraltar, which runs through the village, made Gaucin a popular rest stop for Roman soldiers and, later, British artists such as David Roberts, a painter from the 19th century Romantic school.

However one of the most infamous historical dates that stands out in the minds of Gaucin natives today is the 1808 invasion of the French during the Napoleonic Wars.

A heavy loss was suffered by the mountain pueblo when the village was pillaged, and nearly all of its inhabitants murdered.

Gaucin was eventually reconquered by the Spanish in a triumphant battle that is re-enacted by the locals annually, wearing authentic French military uniforms.

Today Gaucin is more famous as one of Andalucia’s most sought-after chill-out destinations – an artists’ enclave full of character and charm.

If you’re looking for a relaxed holiday, away from the bright lights of the Costa del Sol, Gaucin is made to measure.

Ask Fatboy Slim and his wife Zoe Ball who have been a couple of times, ask Jamie Oliver, or the Sainsbury family who come every summer… and above all, ask Gordon Ramsay who has just spent a week filming a TV show in the town at Granada Divino restaurant.

Sleepy and slow-paced but not devoid of life, you only have to plug into the breathtaking views to recharge your batteries: a panorama encompassing the Rock of Gibraltar and Morocco on one side, and the sweeping valleys of the Ronda mountain range on the other.

To appreciate these views at their best, strap on your walking shoes and get ready for some invigorating but very doable hikes along the old Camino de Gibraltar itself, following in Roman footsteps… 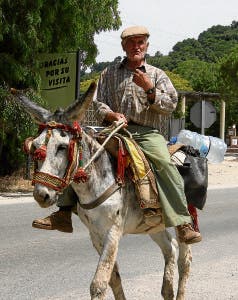 Finding the path is easy as it is very clearly sign-posted in the village. Just don’t forget your water bottle!

To see the valleys, pay a visit to the Castillo del Aguila (Eagle Castle), a Roman castle now in ruins that watches over Gaucin like a sentinel. It’s easy to find from the northern side of the village and well worth the trip.

Throw in the mountainside church and high-rise cemetery, and the adjoining history museum, for the complete experience.

If you just want to kick back and play lounge lizard, Gaucin can help with that too. Or at least, that’s according to one British couple holidaying in the village.

When asked what there was to do in Gaucin, their reply was succinct: “Sleep.”

But while, it can certainly be a quiet restful place for a break, you can also enjoy the buzz in summer hanging out at one of the pavement cafes.

Gaucin is bursting with personality, so hanging out in town is an entertainment. Excellent cafes, restaurants, shops and hotels are scattered throughout, and in summer the population of 2,000 inhabitants, grows manyfold.

Although distinctly Spanish, Gaucin also bears the hallmarks of an expat invasion.

As you browse the artisan shops and trendy clothing boutiques, look out for the hand-painted ceramic lizards that adorn the walls of almost every street.

These ‘salamandres,’ as they’re known, were created by a couple of locals as a marketing ploy to give Gaucin identity.

Though no one knows why the salamander was chosen, they became wildly popular (400 went up in total) through a competition among local artists to create the most original lizard.

On the subject of artists, the town has perhaps the most important collection of artists on the Costa del Sol, with dozens having studios in the town.

This all becomes abundantly clear when twice a year the group organise their Art Gaucin weekends during which they throw open their doors and sell dozens of paintings.

In between retail therapy and lizard spotting, make sure you seek out the centuries-old Fuente de los Seis Canos (Fountain of the Six Pipes). This historic attraction – dating back to 1628 – features six waterspouts, each fashioned into the shape of a different animal’s face. The water is potable and mountain cool, perfect for a mid-afternoon pick-me-up.

If all this peace and tranquility makes you restless, Gaucin has another great advantage: its proximity to Gibraltar, and Ronda, one of Europe’s most beautiful cities.

To ramp up the fun of a visit to Gaucin, try to plan your trip around one of the annual fiestas.

Gaucin holds a massive flamenco festival every summer, usually in the last week of July or the first of August. The ‘Festival Flamenco del Corcho Valle del Genal’ was only started in 1997 but has grown into a widely-anticipated event. And there are many more happenings throughout the year.

Best of all, despite its modern restaurants and thriving expat cottage industries selling everything from pottery and paintings to sculptures and hand-forged iron, Gaucin will give you a taste of a more authentic Andalucia, a glimpse of how it once was in the days of the old Camino de Gibraltar. Just belt up for the journey and enjoy!