CAROLINA Marín is the first-ever Spaniard to win the Badminton World Championships after defeating her final opponent in Copenhagen on Sunday.

“I knew I had to change the game plan. Xuerui was so good at the net and I needed to keep her away from it,” said Marín.

“I tried to minimise my mistakes and I finally pulled it off.”

Li seemed in control during the opening game but Marín persevered in the second set, rising to the occasion and establishing an early lead.

From then on Marín took the offensive, refusing to stand down, as Li battled on but eventually started to waver.

The third set was paused at Marín 16-15 when Li received treatment for her right ankle but still fought hard in the final haul.

History repeated itself in Copenhagen when Li’s final shot struck the net and Marín sprawled out on the court in delight as the second European in 15 years to win the women’s singles title since Camilla Martin’s Copenhagen victory in 1999.

The Junta de Andalucia President, Susana Díaz, has offered her “sincere congratulations” to the athlete from Huelva.

She told of her ‘tremendous satisfaction that an Andalusian athlete, an Andalusian woman, the result of their sacrifice and daily delivery, has fulfilled their dream and has made ??us feel proud of their success’. 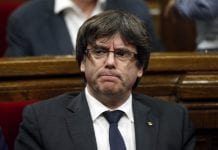 SPAIN: Carles Puigdemont won’t return without us knowing, even in the boot of a car 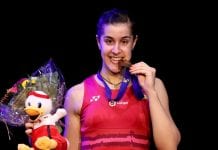 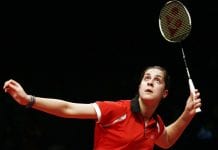 Spanish badminton star rumoured to be opening academy in India